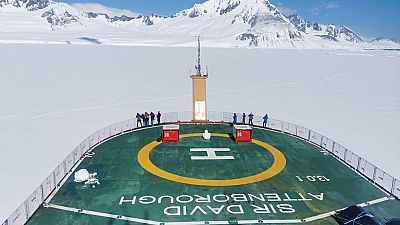 How do you celebrate Christmas in the most remote outpost on Earth, where the nearest supermarket is a five hour flight — or four day boat trip — away, and where penguins outnumber people 12,000-to-1?

The answer? It’s all about the logistics.

“We’re on an ice shelf on this station so literally all you can see is snow and ice everywhere, and there’s 24 hours of daylight, which is very strange and a bit confusing trying to get used to,” explains Millie Bond, a PhD researcher with the British Antarctic Survey at Halley Station in Antarctica.

Britain is one of a dozen European countries that maintain research stations in Antarctica during summer or winter — including Germany, Norway, France, Spain, Russia, Italy — and a host of other nations like China, the USA, New Zealand and Argentina.

“It’s all quite a challenging situation, particularly at this station,” says Millie, who arrived at Halley Station during November, after spending two weeks quarantining in South Africa.

“They’ve not had a ship come in to drop off cargo for quite a while, so the cargo we can bring in is very limited to what a plane can bring in and how many flights they’re able to get,” she adds.

If the 33-strong contingent at Halley are lucky, cargo that arrives from a larger British base at Rothera Station might have some Christmas goodies stowed on board.

Christmas day is moveable in Antarctica

Since so much of the work that scientists do in Antarctica depends on having good weather to operate outside, they can’t afford to spend a day celebrating Christmas if the weather is fair.

“Normally I’d have a very family-oriented Christmas, either just at home with my parents or going to see other family members in other parts of the UK” says Millie Bond.

“This Christmas I think will be quite different.”

“First of all, Christmas day itself is quite moveable, because we’re at the mercy of the weather so if there’s a day with poor weather when no-one can actually get any work done it makes sense to move Christmas to that day and have a big Christmas dinner all together if people aren’t going to be able to do much work anyway,” says Millie.

Halley Station, first established in 1956, is a modular base on the 130-metre thick Brunt Ice Shelf near the Weddell Sea. The station is built on skis, so that it can be moved as the ice shelf gets closer to the open sea. It was here that scientists first discovered the hole in the ozone layer in the 1980s.

Temperatures at this time of year can dip well below zero - even reaching -50°C in the middle of winter.

When the crew at Halley Station does celebrate Christmas, it will look traditionally British — but without any fresh ingredients.

“I think we have some Christmas food that hasn’t arrived this year let’s say, but the chefs here are absolutely amazing and I know they will still do a very nice meal,” Millie laughs.

“I think we’ll have turkey and Brussels sprouts, because we’ve not got any fresh vegetables unfortunately at the moment. But there’s definitely turkey that’s been here and been frozen for a while. I feel like I’m not making it sound very appetising but I’m genuinely excited because the chefs here are really good!”

“We should still get most of the traditional Christmas food, just nothing particularly fresh unfortunately,” say Millie.

Although it wasn’t possible to bring a lot of festive luggage from home, Millie did find space to pack a few items, including some small presents, an advent calendar and some Christmas cards.

“It will be nice to put them up in my room at the base as well.”