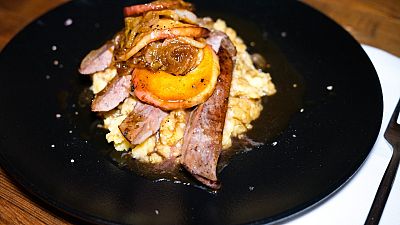 Martin Temlitz from Speisewirtschaft, a restaurant established by the locally-renowned Kumpel & Keule butchers in Kreuzberg, shares with The Kitchen a modern classic from the German capital: Berlin-style liver. It is a delicious dish with strength and personality, which became new favourite for those with a sweet and salty tooth.

In Berlin, newcomers often wonder "How do I become a real Berliner?" Well, the Berlin-style liver is a success story.

The dish originally had a long name: 'Calf's liver with apple, onion and mashed potatoes'. But thanks to popular rule, its name has been shortened and claimed by Berlin.

Eating liver is common throughout Germany, but the combination of these side dishes -- apple, onion and mashed potatoes -- make it special. All flavours put together are more than the sum of their parts, and reminiscent of all the different facets of Berlin.

Kumpel & Keule is an artisanal butcher shop in Berlin that “honours the butcher’s craft and the life of the animals.”

In 2017, thanks to popular demand, the Kumpel & Keule butcher shop opened a restaurant called Speisewirtschaft, whose recipe has been featured above. The restaurant, headed by chef Martin Temlitz since 2007, focuses on the great German food, serving both traditional recipes and modern takes on old classics. The restaurant and the butcher shop have built a high reputation for their clean, ethical, and nicely looking dry-aged steaks, charcuterie and handmade sausages, as well as for its down to earth, honest approach to meat.