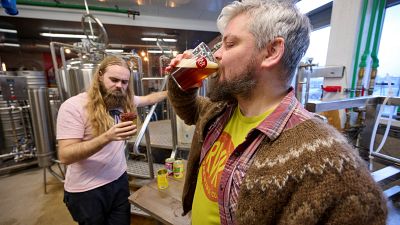 A Christmas beer made from green peas and marinated red cabbage has become a festive hit in Iceland   -   Copyright  HALLDOR KOLBEINS/AFP
By Theo Farrant  & AFP  •  Updated: 01/12/2021

A beer made with canned peas and pickled red cabbage is fast becoming the perfect match Iceland's Christmas festivities.

The fermented beverage is the latest product of the rich imagination of Valgeir Valgeirsson, master brewer at RVK Brewing.

'I was surprised by how good it tasted'

Valgeirsson has already excelled in marketing beers made from seaweed, from the foot of a Christmas tree, or from dried fish.

"It was weird," admits the 41-year-old Icelandic man with a pepper and salt beard.

During the various stages of preparation, cabbage and peas are mixed with malted barley, hops and cloves, among others.

It's made in Reykjavik in a modest brewery with an annual capacity of 50,000 litres – modest on the scale of the oceans of beer produced by the world giants.

The first batch, sold only online at the Vínbúdin site – the state-owned store that monopolises alcohol sales in Iceland – sold out in six hours.

Why peas and cabbage?

The idea germinated after an impromptu phone call six months ago. “The challenge was something I was looking for,”says Valgeir.

He has partnered with the Ora brand, the country's leading food manufacturer, to market the preserves of the two Christmas vegetables.

On the surface, the association doesn’t seem appetising, but it’s symbolic for Icelanders: the habit of tasting them at Christmas dates back to a time when fresh produce was hard to find, especially in the winter.

Whether they find the idea great or disgusting, locals are curious to taste it.

"I was surprised at how good and pleasant it was, compared to when you see the peas and red cabbage being poured into the brewer," says Hédinn Unnsteinsson, who notices the smell of vegetables.

“I was expecting a more pronounced taste of the ingredients,” marvels Níels Bjarki Finsen, who compares it to English “bitter” amber beer.

Watch the video above to see how this unusual beer is made.