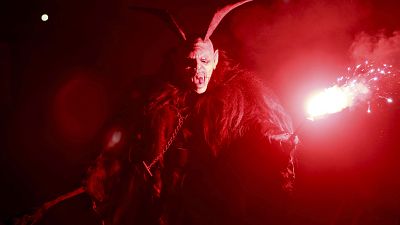 Santa coming to town is an exciting time for every child, but what about when he brings his ghastly ghoul of a mate?

Many European countries have a scary Santa counterpart who punishes naughty children. These anti-santas can be terrifying enough to make kids behave all year round, which is probably the point.

The festive frights often have interesting back stories that stretch back to ancient folklore, so let’s explore some of the characters that you’d rather not see you when you’re sleeping.

Half-goat, half-demon and 100 per cent frightening, this horned anthropomorphic terror is the counterpart to St Nicholas, the traditional patron saint of children (known later on as Santa Claus).

Traditionally Krampus - whose name is taken from the German word for claw - would show up on December the 5th, known as Krampusnacht. Thought to be the son of the Norse god Hel, Krampus beats children who are naughty and has even been known to kidnap them.

Recognisable by his horns and the chains he drags behind him, Krampus has had a resurgence of sorts in recent years. Austrians sell Krampus merch and he has been the subject of a film, while in real life drunken men dress up as Krampus and chase people through the streets in a krampuslauf (Krampus run).

Deep in the mountains of the Icelandic hinterlands is where this Scandinavian Christmas witch lives.

Famed in Icelandic sagas, Gryla has a horned tail and a large sack that she uses to carry children back to her cave, where she puts them into a delicious stew which she shares with her 13 troll sons.

Any youngsters who manage to stay out of the stew pot will also have to watch out for Gryla’s pet, the terrifying yule cat Jólakötturinn. This ferocious feline wanders the streets looking into children’s bedroom windows. If they can’t prove they got new clothes for Christmas (a sign they’ve been well behaved) the cat will eat them.

A ghoul in the form of a classically frightening witch, Frau Perchta is a Christmas monster you don't want to cross.

This crone - often depicted with a bent back and warty nose - looks for naughty children who she slices open, disembowels and fills with straw.

Often accompanied by a gang of ghosts - or in some accounts evil spirits - the only way to fend her off is to leave out a special porridge called perchtenmilch.

These hairy little goblins live underground for most of the year where they attempt to bring about the apocalypse by sawing down the ‘World Tree’.

However for Christmas day and the following twelve nights they are allowed to roam the earth where they attempt to gain entry to people’s houses and play annoying pranks on them.

For those who want to avoid having their furniture rearranged or finding goblin poo in the kitchen, a way to ward off these little devils is by hanging a pig jaw bone in the door frame. A more palatable option is a colander on the doorstep which will distract the kallikantzaroi as they stop to count the holes (they can only count to two).

After their reign of terror on the earth’s surface is over they return underground to find the World Tree has healed itself, and begin their hacking at its trunk for another year.

Santa’s little helper in this North-eastern region of France takes on a darker shade. Hans Trapp accompanies Santa and beats children who are naughty, but his origin story is truly the stuff of nightmares.

In the 15th century Hans Trapp was a rich and greedy local in Alsace-Lorraine who took an interest in satanic rituals and black magic. After being arrested by the catholic church he was exiled to the Bavarian forest where he sank deeper into his evil ways.

Consumed by a desire to eat human flesh, Trapp began to wander the countryside disguised as a scarecrow until one day he came across a hapless young boy. Pouncing on the child Hans ran him through with a sharpened stick and took him back to his lair to roast over an open fire.

It was at this point that God decided things had gone too far and struck Hans with lightning, killing him before he could have a bite of his grisly meal.

To this day Hans wanders the region looking for children to nibble on to satisfy his cannibalistic appetite.