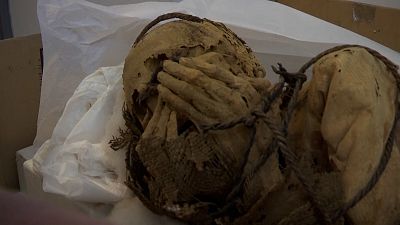 Peru is a country with frequent archaeological discoveries from the Inca era and previous periods   -   Copyright  AP Photo
By Theo Farrant  & AP  •  Updated: 30/11/2021

Archaeologists in Peru have found an exceptionally well preserved mummy that appeared to be in distress at the time of its passing.

In a country famed archaeological discoveries, this particular mummy has caught the attention of the internet for the pose in which it was found – tied in ropes, with its hands covering its face.

The discovery was made an underground structure accessed by a seven-tiered staircase.

It is situated in Cajamarquilla, a small district 25km inland from from Peru's capital, Lima.

Experts believe the finding could be over 800 years old.

Many other underground discoveries were made

Ceramics, vegetable remains and stone tools were also recovered from the tomb.

In pre-Inca Empire times Cajamarquilla was a commercial centre where people of various ethnic groups lived.

Archaeologists believe that the mummy dates between 800 and 1,200 years after Christ and is from either the pre-Inca Wari culture or the Chaclla culture.

Take a look at the incredible mummy discovery in the video above.

Villa featuring world's only Caravaggio mural on sale for €471 million