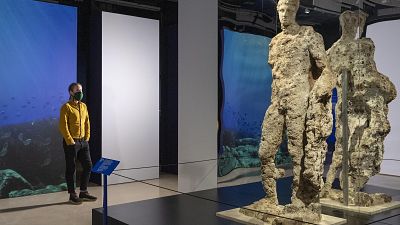 The 'Ancient Greeks: Science and Wisdom' exhibition has opened at London's Science Museum.

Visitors will be able to get a better understanding of the scientific influence of Ancient Greece in today's world.

Items are arranged in thematics based on areas of the natural world that people are familiar with today: seas, cosmos, animals, human body, and music.

The statue of the ancient Greek god of trade, Hermes, is a particular highlight and dates from 100 to 150 BCE.

Dr. Jane Desborough, Curator of Scientific Instruments at the Science Museum says the statue was recovered from the famous Antikythera shipwreck (the remains of a Greek trade ship dating from the First Century BCE).

"It was recovered in around 1901. He would have been a trade product himself, not only being a statue of Hermes, but also a beautiful product that people were desirous to buy. As you can see, he's undergone some heavy underwater erosion to his body, but his face appears perfect, and it's because it was protected by silt on the seabed for two thousand years before he was recovered."

Another treasure is a smaller statue of an athlete pouring oil on his body before one of the Pan Hellenic games, of which the ancient Olympics was one.

Not only is it in great condition but he's striking because of the proportions. And there is a reason for that.

"He's in our mathematical body section," says Desborough. "And there we're looking at how the ancient Greeks had a perception of the ideal symmetrical body that they believed was personified by victorious athletes who competed at the Pan Hellenic games."

The music of mathematics

Another section is dedicated to music because philosopher Pythagoras taught that the beauty of music could be explained mathematically. Not an easy thing to get across in an exhibition.

"We're trying to explain how Pythagoras and his followers sought to explain music in mathematical terms. So that was about musical ratios and intervals or intervals expressed as ratios. And what we're doing with the interactive (screen) is trying to explain some of that, as you say, quite complex mathematics and break it down for people so that they can understand it and how it relates to the Aulos, which is the original musical instrument on display," says Desborough.

The exhibition is part of an initiative celebrating the bicentenary of Greek Independence. It runs until 5 June 2022.