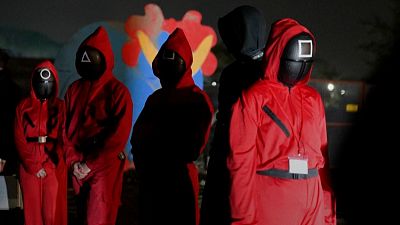 In the wake of the hugely popular Korean Netflix TV series, Squid Game, Enigma Room is organising an adrenaline-pumping simulated version of the show in Milan.

50 thrill-seeking contestants face six games in total - many of which feature in the original show, such as the tug-of-war and ‘Red Light Green Light’.

How does Italy's 'Squid Game' work?

Participants are picked up at meeting points and taken blindfolded in vans. They are then divided into teams and compete against each other to earn points.

In this organised events, costing participants €25 to enter, guards dressed in red shoot plastic pellets at the losers. Participants wear masks to protect their faces, along with a t-shirt adorned with an identifying number.

After the outdoor games they are taken inside a restaurant where they can relax with some food. But those who make a mistake in carving the honeycomb biscuit (otherwise known as Dalgona) face immediate elimination.

The prize in not quite the 45.6 billion won offered in the show. The winner instead gets free entry to another game.

**Check out the video above for a glimpse of the real life Squid Games. **