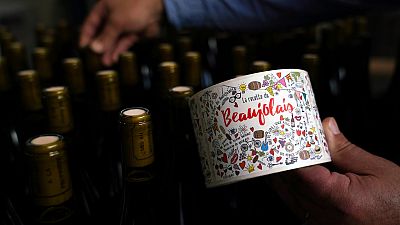 It's the third week of November and for the wine industry, that means one thing. Beaujolais Nouveau.

A cultural (and viticultural) phenomenon that began in the post-war years of the mid-20th century, Beaujolais Nouveau has swept across the globe for decades, generating a certain autumnal excitement in those who desire to sample the newest crop of the Gamay grape.

As the clock strikes midnight on the third Thursday of November, the wine offically becomes available, and, in the times before COVID, the rituals, festivities and parties begin. And though celebrations were necessarily muted for the 2020 edition, producers still rushed to get the new vintage out. 2021 by contrast looks to be very much business as usual.

Nestled between the gastronomic city of Lyon and the revered Burgundy region (where the most expensive wines in the world are cultivated), Beaujolais is the home of some of the most affordable wines on the market. And none more so than the hastily-fermented mid-November offering, for which many still clamour.

But is it really for the wine? Could it just be the occasion? Something boozy for the calendar? And, perhaps more importantly, does is give the rest of the region a bad name?

It is specially created for early drinking. Essentially, it is rushed out. Grape juice is almost always left to ferment and mature for a least a few months before it moves to the shelves. But for BN, it has hardly had time to rest in its tank before it is frantically bottled and put on sale. It's about as close as you can get to wine straight from the vine.

What is it made from?

The grape is called Gamay. It's the only red grape grown in Beaujolais, its natural home.

Gamay, when left to ferment and mature in a normal time frame - harvesting in September and not bottling until the following spring - will give off aromas and flavours of raspberry, cherry, and light blackcurrant with a peppery spice in the mix. But when not left to ferment and mature very much at all - the case with BN - it can taste quite strongly of bananas, which can be rather unusual upon your first sip.

And here is the issue. This swath of sandy granite contains an enormous variety of Gamay wines due to differing growing conditions. Erosion of the topsoil over time has created plots of land that can produce a wine hugely different to one made a few miles away. The area is inhabited by serious winemakers, some of whom spend a great deal of money on new oak barrels to give complexity and structure to their output. They carefully plant their vines in the granite soils which are low in nutrients, regulating the yield which in turn concentrates flavours. It can be a lifetime's work. But when they travel abroad and mention where they make wine, you can guess what the common reaction is.

"It has become a cliche," says Julien Bertrand of the Domaine Bertrand. "People who haven't tasted the wine will say: That's disgusting, it tastes like banana."

Bertrand produces some Beaujolais Nouveau, but it's not his best-selling wine, nor a big part of his production, which comes from 15 hectares of land spread over six towns. "The fad has passed", he said. "We still make it, in lesser quantities. The focus is more on quality now."

One of the world's best-known wine writers, Hugh Johnson, describes the height of the craze in the UK in his book Wine: A Life Uncorked:

"For a year or two in the early 90s it was fun to follow the crazy race to be first home, by hovercraft of helicopter, with the new raw vintage. We forced ourselves to swallow the pale purple banana-flavoured acid as though it was a once-in-a-lifetime chance."

So is it time that this phenomenon came to an end?

"I don't think so," says Etienne Ubaud, who alongside Simon Pérot has made biodynamic wines at Domaine des Canailles in Ternand, southern Beaujolais since they recently took over the vines in 2019.

"I was really surprised by the demand this year. Our main customers are wine shops and they are really interested in this product. It is probably because Beaujolais Nouveau is very good value for money, and when it is made by good producers, it is a high-quality product."

Etienne explains that over 90 per cent of Beaujolais Nouveau is made by "big industries who make standardised, bad wines," and stresses that "Beaujolais" and "Beaujolais Nouveau" are not the same. But even though it only represents one-tenth of their production, they are standing behind it.

"Nowadays professionals, especially sommeliers, like easy-drinking wines and Beaujolais Nouveau is the perfect example of those kinds of wines," he adds.

And it's true that many of the wine industry's glitterati adore Beaujolais wines. Easy-drinking wines with fresh acidity can be a welcome change from the sommelier's universe of structured complexity, but more than that, Beaujolais becomes more interesting the closer you look at it.

The ten crus of Beaujolais

Not quite as bizarrely varied at the twelve days of Christmas, but worth buying as a gift for one's true love nonetheless, the northern half of the Beaujolais region is divided up into ten crus which each produce noticeably different wines.

They range from tiny St Amour in the north (in spitooning distance of the southern Burgundy area of Macon) to Brouilly 50 kilometres to the south. "Because of the multitude of terroir and winemakers in Beaujolais, there is not one Beaujolais, but multiple Beaujolais," says Antoine Péchard, who runs Domaine Tano Péchard with his parents Patrick and Ghislaine.

Just north of Brouilly is Régnié, where Domaine Tano Péchard sits amongst its 13 hectares of vines. This is the home of the Régnié Canicule 2014, voted the best Gamay in the world in 2017.

"Gamay is the grape that translates most perfectly in this terroir. It is fragile and demands a lot of caution during vinification (winemaking process). Wines are mostly fruit-forward, with supple tannins and very easy-drinking," explains Antoine.

And there it is again. Easy-drinking. But that's not to imply simplicity, You don't win an accolade like World's Best Gamay without knowing what you're doing, and the Canicule ('heatwave') is aged for 20 months in oak barrels, which adds levels of complexity and secondary elements such as vanilla and charred wood.

The ageability of wines like this and the aforementioned 'canicule' stand in contrast to the reputation of Beaujolais for many outsiders, as these two examples will still have something interesting to say to a drinker in 15 or more years. Moreover, neither of them will cost you more than 20 euros a bottle.

Tano Péchard also make Beaujolais Nouveau so do not rail against the concept. On the contrary, they feel their early drinking November wines are very much part of the future of the region.

"No I don't think the phenomenon should come to an end," says Antoine, "Even if this event decreases slowly in popularity it will always exist because a lot of people appreciate this Beaujolais in France and all over the world. Also, the new generation of consumer is younger and doesn't come to it with any bias.

One of the more recent trends in winemaking is that of "natural wine", which are wines made with minimal intervention in terms of how it is filtered and what is added to it during the production process.

"I like natural wines but without defects," says Etienne. "To me, a Beaujolais Nouveau has to be made with native yeasts, without filtration and with not too many sulphites added. In those cases, Gamay expressions can be great."

Indeed, some credit the much-talked-about Beaujolais winemakers of the 1960s, the so-called 'gang of four' of Marcel Lapierre, Jean Foillard, Charly Thevenet and Guy Breton as the forefathers of the natural wine phenomenon, as they rejected move towards chemicals and pesticides in vineyard management and advocated a return to the pre-war methods their ancestors employed.

An 'English Nouveau'? What do the French think?

This time last year, reports crossed the channel of an English winemaker giving the early release game a go with Pinot Noir. I had to ask these French winemakers for their reaction to the idea of an English 'nouveau'.

"Wine not!" quips Etienne. "You have to know that 'vin nouveau' doesn't only exist in Beaujolais. You could find it in Gaillac (south-west), the Rhône valley, the Loire valley, with other grapes then Gamay. So why not with pinot!"

Antoine offers similar encouragement. "I think it's a nice thing and we'd like to taste it! It proves that there is an interest in nouveau wines. People are looking for joy and conviviality in their drinks."

Perhaps, in years to come, we will witness the "nouveau" version of the famous Judgement of Paris from 1976, but this time the English will take on the French rather than the Californians. It may be a few years off yet, but with changes in climate baking the grapes of traditional winemaking areas and ripening varietals in colder regions, rivalry may come sooner than anyone envisaged.