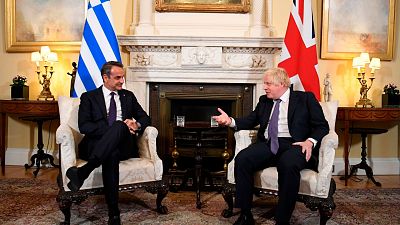 The leaders met at 10 Downing Street to discuss the return after rising demand across Greece   -   Copyright  AP Photo/Daniel Leal/Pool
By Shannon McDonagh  with AP and Reuters  •  Updated: 17/11/2021

British Prime Minister Boris Johnson held talks Tuesday in London with Greece's leader amid a renewed for the UK to return marble statues that once stood in the Parthenon.

Johnson said he “understood the strength of feeling of the Greek people” about the sculptures after Greek Prime Minister Kyriakos Mitsotakis raised the issue during the talks.

But the British leader stressed that decisions about the issue rest with the British Museum, where the marbles are held.

What are the Elgin Marbles?

The marbles — 17 figures and part of a frieze that decorated the 2,500-year-old Acropolis monument — were taken by Lord Elgin, the British ambassador to the Ottoman Empire, in the early 19th century. Britain maintains that Elgin acquired the sculptures legally when Greece was ruled by the Ottomans.

MEPs from 12 different European countries gathered last year to call on Johnson to return the frieze.

Mitsotakis has gone as far as to suggest that Greece would be prepared to loan out other ancient treasures in exchange for the marbles.

A return request backed by the United Nations

“The obligation to return the Parthenon sculptures is entirely up to the government of the United Kingdom,” Oikonomou said. He added that the Greek request for government-to-government talks on the issue was backed by the United Nations’ cultural agency, UNESCO.

Greece has said the new Acropolis Museum that opened in 2009 would be used to display the sculptures if they were returned.

Greek Prime Minister Kyriakos Mitsotakis confirmed on Friday that the Parthenon sculptures in the British Museum should be returned to Athens and called for talks with Britain to achieve that aim.

British Prime Minister Boris Johnson said in March that Britain is the legitimate owner of the Parthenon marbles, rebuffing Greece’s permanent request for the return of the 2,500-year-old sculptures.

"The UK should move to a bona fide dialogue with Greece, and I urge them to do so," Mitsotakis said in a speech in Paris.

"Therefore the obligation to return the Parthenon sculptures lies squarely with the UK government," he said.

British museum claims they are 'part of everyone’s shared heritage'

Since independence in 1832, Greece has repeatedly called for the return of the sculptures - known in Britain as the Elgin Marbles - that British diplomat Lord Elgin removed from the Parthenon temple in Athens in the early 19th century, when Greece was under Ottoman rule.

The British Museum in London has refused to return the sculptures - roughly half of a 160-metre frieze that adorned the 5th century BC monument - saying they were acquired by Elgin under a legal contract with the Ottoman Empire.

It says they "are part of everyone’s shared heritage" and that Elgin's actions were “thoroughly investigated by a Parliamentary Select Committee in 1816 and found to be entirely legal, prior to the sculptures entering the collection of the British Museum by Act of Parliament.”

The museum's trustees added they “firmly believe that there’s a positive advantage and public benefit in having the sculptures divided between two great museums, each telling a complementary but different story.”