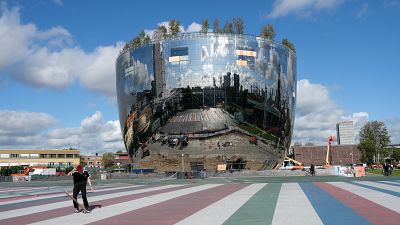 Normally museums exhibit only a small proportion of their collections, but Rotterdam's Boijmans Van Beuningen Museum has become the first art storage facility in the world to offer public access to its complete collection.

Described as the "museum of the future", with institutions across the world set to follow its path, the new depot was designed to look like Noah's Ark and was purposely created to display all of its 151,000 pieces at once.

Many of these unseen relics were formally housed in the museum's basement.

"Every building is a moment in time. So this celebrates, I think, for sure, the climate. Why? Because it's the 'raison d'être' of this building. The former archives were under water. It was flooding, so we have to bring it up," revealed Winy Maas, the architect behind the Boijmans Van Beuningen museum's art storage depot.

Works by unknown artists will take their place alongside the masters, carefully arranged and labelled across five floors, with different storage temperatures.

This unique building will also display lesser-known masterpieces by the likes of Salvador Dali and Vincent Van Gogh.

"It is the only fully accessible public depot that is open in the World. There is in some museums a kind of depot, but that is always a very small area, and some private collectors have depots that they enjoy themselves but these are not public, you cannot enter there," said Sjarel Ex, director of the museum.

"If you do not show the works, and people stop talking about and thinking about an artwork, it is very likely that it sinks into oblivion. Out of sight, out of heart," Ex went on.

From Saturday, the King of the Netherlands Willem-Alexander, will open the depot, a bowl-shaped warehouse next to the Boijmans museum’s original 1930s building.

The facility will leave nothing to the imagination and serve as a mecca for art lovers.

"So what happens here is that you do not follow the script that was written by a curator, which can be great and is great and one of the best things that we do, but you see things by coincidence, and you feel that you are discovering things and that you connect to things," Ex noted.