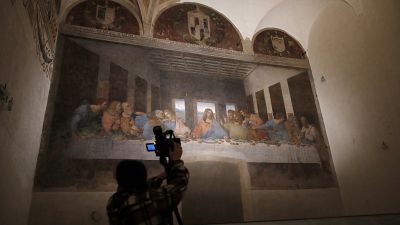 Italy’s top city for tourism is taking steps to reopen some of its cultural sites to local residents, making them top priority visitors for the first time ever.

The home of Leonardo Da Vinci’s ‘Last Supper’ mural is opening its doors to nearby residents for the first time since November.

Santa Maria delle Grazie church is used to receiving almost half a million visitors annually, suffering in the past year due to two lockdowns.

It was closed to the public from February 26-June 9 and struck again by a second wave.

Those that live in Milan usually have to wait weeks - if not months - behind the swathes of tourists the city attracts.

How many people can see the mural each day?

The world-famous mural is allowing just 12 visitors every 15 minutes, rising to 18 after a trial period. In usual circumstances, the number is 25 per slot to preserve the features of the mural by avoiding high temperatures and dust.

Da Vinci’s Last Supper joins the partial reopenings of landmarks such as Florence’s Uffizi Gallery and Rome’s Colosseum, spelling a light at the end of the tunnel for one of Europe’s hardest hit nations.

Emanuela Daffra, Director of the Lombardy Museums, describes reopening as a “great joy”.

"What has changed and will remain as is for a long time I'm afraid is the international flow of tourists”, she says.

“Before the pandemic people would arrive from the Far East, from the United States, from South America. This is no longer. So it is much easier for Italians and people from Lombardy to find a spot.”

Along with masks and hand sanitiser, Emenuela reveals that Santa Maria delle Grazie will now use an air filtration system to ensure maximum safety.

"The preventive systems put in place to treat The Last Supper by Leonardo also have a healthy effect. The filtering system here is absolute, similar to those found in sterile rooms, so in this enclave of Milan you can find the healthiest air in the city."

What do the people of Milan make of it?

"I feel it's an experience of new beginnings. Italy is full of art, full of beauty and to be able to get close to that beauty means reclaiming life as a whole”, says Roberto Ponti, one of the reopening’s earliest visitors.

“I believe that opening up the Last Supper, a piece that is well known and printed and reproduced all over the world, means we are taking a step forward into a life that may be different socially but that can go on”.

The iconic Acropolis in Athens is covered in snow