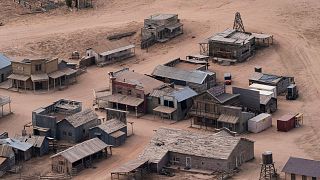 The woman in charge of weapons on the 'Rust' movie set says she inspected the gun supplied to actor Alec Baldwin but doesn't know how a live bullet ended up inside it.

"Who put those in there and why is the central question," Hannah Gutierrez Reed, the armorer for the movie said in a statement issued by one of her lawyers, Jason Bowles of Albuquerque, New Mexico.

She alleges she kept guns locked up, including throughout lunch on the day in question, and instructed her department to watch the cart containing the guns when she was pulled away for her other duties.

This follows up a widely-quashed suggestion from Bowles that the shooting was a result of "sabotage" from a disgruntled crew member.

'She always inspected the rounds'

Her role in charge of on set prop guns has been the focus of queries about how the accident could have happened and who is liable.

The statement adds that she inspected the rounds before handing the firearm to assistant director David Halls "by spinning the cylinder and showing him all of the rounds and then handing him the firearm."

"No one could have anticipated or thought that someone would introduce live rounds into this set."

Gutierrez Reed noted that she did firearms training for the actors as well as Mr. Baldwin, she fought for more training days and she regularly emphasised to never point a firearm at a person.

Santa Fe County Sheriff Adan Mendoza concedes there was "some complacency" in how weapons were handled on the set of 'Rust.'

Investigators initially found 500 rounds of ammunition — a mix of blanks, dummy rounds and what appeared to be live rounds. Industry experts have said live rounds should never be on set.

Additional ammunition, a dozen revolvers and a rifle also were seized in the search of a white truck used for storing props including firearms, according to an inventory list filed Friday in court.

Cogs are turning thick and fast in the film industry to form a response to the tragedy.

Dwayne 'The Rock' Johnson, the world's highest paid male actor, says his production company Seven Bucks will no longer use real guns on any set.

"Moving forward on any Seven Bucks production, in television or film or otherwise, we will not use real guns ever again. We are going to be using rubber guns and we'll take care of it in post," Johnson said, at the Los Angeles premiere for his latest project, Red Notice.

Johnson plays an FBI profiler who is after the two biggest art thieves in the world, played by Ryan Reynolds and Gal Gadot.

"It's created a new lens and new perspective on how we can operate moving forward. We have to use, as awful as this situation was and is, we have to use this as an example and I think in a way to be smarter as we move forward, be safer."