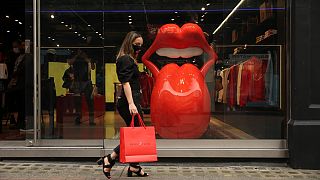 All these products will of course be marked with the famous Rolling Stones logo: red lips and provocative sticking-out tongue.

A logo created almost 50 years ago by a young art student named John Pasche whom the group had then paid 50 pounds.

The new shop was prevented from opening its doors as planned earlier this year due to the ongoing COVID-19 pandemic.

However, despite a lower than average number of shoppers currently out on London's streets, staff are confident it can be a success.

The surrounding Soho district was the epicentre of the mythical Swinging Sixties, the era of a cultural revolution, the celebration of hedonism, and the store recapitulates that time.