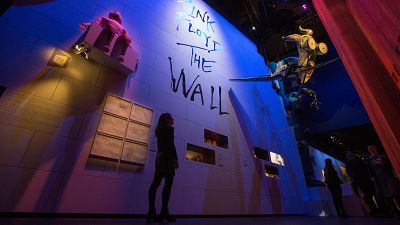 The famed cartoonist responsible for designing Pink Floyd's 'The Wall' album cover has revealed the unconventional way its design came about.

Gerald Scarfe - who was "befuddled" when the band asked him aboard the project - has opened up on his work on Pink Floyd's legendary 1979 rock opera.

He ended up designing the iconic artwork on Roger Waters' kitchen table in a series of last-minute visits to the South of France.

Chosen for his lengthy track record as a political illustrator, it presented an entirely new challenge for Scarfe.

"I had to create all the characters - the wives, the mother, the teacher and all these semi-cartoon figures - very quickly because the album was coming out," he explains.

"The band were in the South of France and I kept flying down to meet them. I actually designed the album cover on Roger's kitchen table."

'The Art of Pink Floyd'

Scarfe's book exploring the project is set to be released on November 11.

'The Art of Pink Floyd: The Wall' will explore the creative fascination that propelled him to journey with the band as they expanded The Wall's universe into live shows, and three years later, a film.

The Wall sold 30 million copies worldwide and comes second to The Dark Side Of The Moon as the band's most popular album. Pink Floyd recorded most of the album over seven months in France, across Super Bear Studios and Studio Miraval.

It produced singles Another Brick In The Wall - the band's only UK and US chart-topper - Comfortably Numb, and Run Like Hell.

Rolling Stone magazine have hailed it as one of the best albums of all time every decade since the publication started producing the list in 2000.

He admitted despite the challenges, the project was "fascinating".

"The live show was incredibly ambitious, with my original illustrations turned into inflatable puppets. Then we did the film, which was tough and very difficult."

The 85-year-old designer went on the head visuals for the Disney film Hercules, and received a CBE for his services to British art in 2006.

'I'm amazed that it has become what it has'

Scarfe went on the detail the creative partnership formed with the band during this period.

"All the images were out of my head. Roger was the originator, but my drawings were my translations of his visions.

"He had his own views, but he accepted what I did. It was a strange marriage really, but we became very close friends."

And the artist said he's "amazed" his work has endured the way it has over the past four decades.

He isn't mistaken - Waters revived the album as a solo artist in 2010, embarking on a three-year, 219-date world tour that embraced the conceptual, immersive theatrics that made it so successful in the first place. It grossed half a billion dollars in the process.

"Looking back, I'm amazed that it has become what it has. It's an iconic piece of work and I'm proud that allying my visuals to their sounds seemed to work," Scarfe added.

"To this day I still get emails and commissions from Pink Floyd fans all around the world."