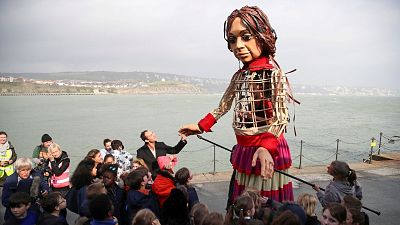 Little Amal arrived on the coast of Folkestone, England, to complete her journey in the UK   -   Copyright  Reuters Connect
By Shannon McDonagh  & agencies  •  Updated: 20/10/2021

A giant puppet of a Syrian refugee child created to symbolise millions of displaced children has arrived in England on the last leg of its journey across Europe.

The 11.5-foot (3.5-metre) puppet named Little Amal — a name meaning “hope” in Arabic — was greeted by actor Jude Law on the Folkestone seafront.

Little Amal has walked an 8,000km journey across Europe from the border of Syria, crossing eight countries in the process.

Her journey represents the pathway many young refugees are forced to take to reunite with family members.

She first set off from the Turkish-Syrian border in July and has been greeted by thousands of people along the way, including Pope Francis in Rome.

'We want the world to grow big enough to greet her'

Little Amal was created by Handspring, the company that made the equine puppets for hit West End and Broadway theater show “War Horse." The puppet was designed as part of The Walk, a traveling festival of art and hope to raise awareness of the problems faced by young migrants.

“Little Amal is 3.5 metres tall because we want the world to grow big enough to greet her,” said Amir Nizar Zuabi, artistic director of project. “We want her to inspire us to think big and to act bigger.”

The idea of Little Amal's journey in search of her brother evolved from “The Jungle,” a play about migration and displacement produced by Good Chance Theatre, set in a camp in northern France where migrants gather hoping to reach Britain.

Migrants from around the world have long used northern France as a launching point to reach Britain, either by stowing away in trucks or in dinghies and small boats organized by smugglers. About 20,000 people have crossed the Channel to England by boat so far this year.

Little Amal's journey will continue to Dover, London and Coventry in England before ending in Manchester, northwest England, on November 3.

In London, Little Amal will celebrate her 10th birthday at the V&A Museum on Sunday alongside children from across the British capital who have been invited to join in musical performances and workshops.

The 25-person puppet entourage will travel to other attractions in London including the National Theatre, Somerset House and Trafalgar Square and will also walk the streets of Oxford alongside a giant puppet of Alice in Wonderland.