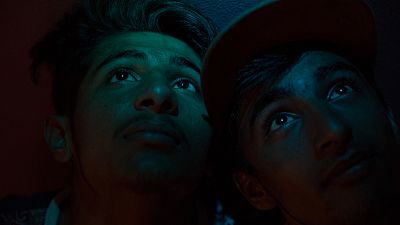 Migrants fleeing war, poverty and violence for what they hope will be better lives in Europe continue to make the headlines.

But what is less well-known is just how dangerous the journey can be.

The crew documented the lives of teenagers as young as 14 from Syria, Darfur and Afghanistan over three years.

"We started to work on the film and met a lot of young people, children on the move," Blankevoort said. "We heard the term 'the game' a lot - 'we are going on the game', 'my next game will be ready soon.'

"We were wondering what are they talking about? And we found out that they use this term to describe this illegal passing of borders. Somehow it's a game. You can win or you can lose. I think it also helps them, but it's a very dangerous game of course."

The young men - from countries including Syria, Sudan and Iran - played this so-called game across much of Europe.

In the film, they also talked about who they are, where they came from, what happened in their home countries, and their hopes for a more peaceful future.

To reach their dreams, they would have to risk their lives and confront seemingly never-ending obstacles.

"We got to see the bad situation they were in," she said. "They are so talented, hoping for a better future for themselves, and they are, in a way, naive of course because they have all these expectations of Europe which probably will not happen."

Aside from the feature-length film, 'Shadow Game' also includes a mobile game and an interactive web documentary series.

'Shadow Game' is due to be released in Europe this spring.

At least 20 dead after smugglers throw migrants from boat