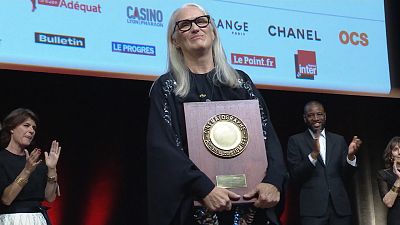 Fresh from winning a Silver Lion at the Venice Film Festival, director Jane Campion has been awarded the 13th Prix Lumière - one of French cinema’s top honours.

The New Zealander received the prize during the Lumiere film festival in Lyon. In 1993, Champion was the first woman to win a Palme d’Or at Canne for her film the Piano. For her female contempories, scooping the Prix was an inspirational achievement.

"I'm very, very, very moved to be here, said French Film Director Julia Ducournau. "It's more than symbolic, I feel this is an intimate place. I’m at home. I respect her infinitely as a filmmaker, she is a filmmaker who has meant a lot to me."

"She is a woman I adore, who’s inspired me a lot, who allowed me to dream, who made me dream of cinema, and who made me feel that anything was possible, with her sympathetic eye, on women especially..."

In full admiration and praise of Campion's contribution to cinema, actress and film director Hafsia Herzi also expressed her delight at the award: "It's incredible, this freedom, this intelligence, this mastery of the stage, it's really a great example,"

A warm welcome in the birthplace of cinema

In front of more than 3000 people, the Kiwi filmmaker was taken aback by the welcome she received in Lyon. Jane Campion is a rare filmmaker. She has made only nine feature films, including her masterpiece "The Piano", as well as only several series, including, "Top of the Lake".

In her films, she explores the most intimate facets of women - desire; the quest for freedom; going beyond the conventions of family and society.

During her visit to Lyon, Campion took part in several public events, including a Masterclass at the Théâtre des Célestins, in the heart of the city. There she explained how she fell into filmmaking - almost by chance.

The southeastern French city was home to Lumière brothers. The two men are regarded as early pioneers of cinema and Campion went to the Institut Lumiere, located on the site where the brothers first set up their cinematograph.

"It's truly the birthplace of cinema, indeed so, it's beautiful that people of Lyon have preserved this monument, really," Campion told Euronews, adding: "I feel like it made my life possible. To grow up in cinema is really... it really worked for me. It felt like these were amazing adults, with great imaginations, who were answering the big questions of like, why are we here? What's the possibility of loving? Who Am I? What's the future?..., just all the important questions, that people, that artists, tackle through stories, and it really made me feel like being part of the world."

During the festival Lumiere, Campion also presented her latest film, The Power of the Dog. Produced and broadcast by Netflix, it will hit the small screen on December 1. The story centres on a brutal Montana cowboy, played by Benedict Cumberbatch, who hides his true nature.