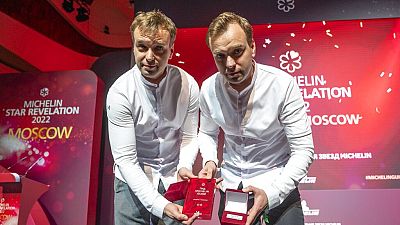 Twins, Garden chefs Ivan and Sergey Berezutsky, who received two Michelin stars, show their award as they take part in the award ceremony, which took place in Moscow.   -   Copyright  Dmitry Serebryakov/Copyright 2021 The Associated Press. All rights reserved.
By AP  •  Updated: 15/10/2021

The Michelin Guide has awarded nine Moscow restaurants with its stars for the first time.

Seven restaurants were given one star, including restaurants "White Rabbit", "Biologie", and "Grand Cru".

"It doesn't matter whether it's New York, London or Moscow: they have the same criteria, the most important is to justify the trust of guests," Ivan Berezutsky told reporters.

The international director of the Michelin guide Gwendal Poullennec told the AP that "over the past five years, the Moscow calendar is seen as being really evolving a lot, with high-quality products, many very talented and promising chefs."

However, no participant was awarded three stars, the most prestigious award of the Michelin.

Representatives of the Michelin guide, known for the international standard of restaurant ratings, released the first edition of recommendations in Moscow.

Overall, 69 restaurants were recommended by the guide.

The selection of restaurants will be available in print and on an app in twenty-five languages, including Russian.

Russia is the 35th country having the Michelin guide, and Moscow became the first city of the ex-USSR to be awarded Michelin stars.

What is the Michelin Guide?

Founded in France, Michelin stars have become highly coveted by chefs around the world, the ultimate symbol of food excellence.

The first Michelin guides were published by André and Édouard Michelin in 1900, and aimed at encouraging motorists to travel to promote their tire company of the same name.

Awarded on a scale, one star is 'very good cooking in its category', two stars 'excellent cooking, worth a detour' and three stars 'exceptional cuisine, worthy of a special journey'.