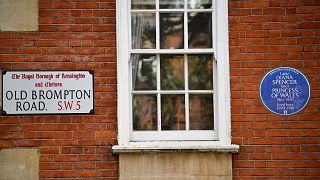 Princess Diana's final residence before marrying into the Royal Family has been honoured with a blue English Heritage plaque.

The Princess shared 60 Coleherne Court, an apartment near London's fashionable King's Road, Chelsea, with a number of friends for two years before she was engaged to with Prince Charles at the age of 19.

One of her roommates, Virginia Clarke, helped unveil the permanent signage during a ceremony that honoured Diana's footprint on the capital.

“Those were happy days for all of us and the flat was always full of laughter," she said. “Diana went off to become so much to so many. It’s wonderful that her legacy will be remembered in this way.”

The London blue plaques scheme was started in 1866 and is the oldest historic awareness scheme in the world.

Across the capital over 950 plaques, on buildings of all shapes and sizes, honour notable figures who have lived or worked in them. The permanent fixtures on the side of each building tend to be very noticeable to tourists on the streets of London's 32 boroughs.

Who receives the honour ranges wildly - the plaque on the side of Westminster's St.James' place notes Frederic Chopin's last performance, while 48 Doughty Street, Camden, marks the residence where Charles Dickens spent most of his time in London.

Each person can be easily searched on the English Heritage website in accordance with the borough and profession.

Diana's plaque comes in the year when she would have celebrated her 60th birthday. Public figures who receive one must be deceased for over twenty years or have reached their centenary.

According to Andrew Morton’s 1992 best-selling book “Diana, In Her Own Words,” Diana described her years at the property as “the happiest time" of her life.

“Diana was one of the world’s most famous women and she used her fame and influence to raise awareness of issues such as homelessness and landmines," said Anna Eavis, the curatorial director at English Heritage.

“It is fitting that our blue plaque remembers her at this place where her life in the public eye first began," she added.

A tiny fraction of these plaques honour women

Diana, who died in a car crash in Paris in 1997, is the highest-profile former member of the monarchy to be bestowed this recognition.

She was nominated by the London Assembly in 2019 after the body ran a campaign asking Londoners to suggest women worthy of a blue plaque.

There was good reason to - only 14 per cent of English Heritage plaques honour women across arts, literature, medicine, and more.

The organisation has been looking to address this problem for several years.

The plaque marks the showroom and office in Mayfair where Muir worked for almost 30 years. ? #blueplaquepic.twitter.com/iWCV8icBWU

Lumley worked with Muir as a model in her Mayfair office during the early stages of her career.