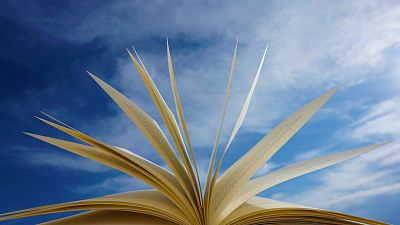 Escapism has never been so en vogue as it is in a world where confinement has been a defining element of everybody's lives. And there's no format like the novel to really let your imagination soar. You can do things in fiction that you cannot do anywhere else. It's limitless.

So here are 7 literary works that you can pick up at your local bookstore (hopefully) and wake your wonder.

Once you have been meticulously directed to Cedar Creek Falls in Queensland, you find yourself in a netherworld where consciousness is elusive and suddenly waking up in a cinema in Soho is not unusual.

You won't know where she is taking you until you get there, but the journey is strange and admirable.

**The Book of Illusions - Paul Auster
**

Silent comedian Hector Mann disappears without a trace in 1929. Decades later, a Vermont professor, battered by alcohol and the loss of his wife and children, lives in a blur. But one night he comes across a clip of Mann and is momentarily taken out of his grief by fascination. What could have happened to this man? Why did he disappear just as he was making a name?

These questions lead David Zimmer on a journey around the globe, as this textured tale pieces together the clues and in turn, intertwines the lives of two men who both in their own ways die and come back to life.

First lines: Everyone thought he was dead. When my book about his films was published in 1988, Hector Mann had not been heard from in almost sixty years. Except for a handful of historians and old-time movie buffs, few people seemed to know that he had ever existed.

The defining work of magical realism, this extraordinary novel will amaze and dazzle you.

You will witness the genesis and then rot of the town of Macondo as seen through the history of the Buendiá family.

From the very beginning of this seminal work by the Nobel laureate, you feel you have entered into another world entirely.

**First lines: **Many years later, as he faced the firing squad, Colonel Aureliano Buendía was to remember that distant afternoon when his father took him to discover ice.

Meet Handel, Sapphi and Picasso. They are not who you imagine them to be, but somewhere in 21st Century England they are escaping the capital and heading through elliptical pages to the stories of an 18th Century 'bawd'.

An enchanting read, with a pulsing narrative voice and beautiful prose.

First lines: From a distance only the light is visible, a speeding gleaming horizontal angel, trumpet out on a hard bend. The note bells. The note bells the beauty of the stretching train that pulls the light in a long gold thread.

The Master and Margarita - Mikhail Bulgakov

The devil comes to the Soviet Union.

This really rather remarkable novel details a mysterious 'magician' who creates unbridled chaos amongst literature's illuminati with his alarming retinue of henchmen, which includes the unforgettable Behemoth, a witty feline.

Lashings of satire, moments of brilliantly dark comedy accompany political intrigue in a work that still has an air of modern fiction about it despite being written in the 1930s.

First lines: At the sunset hour of one warm spring day two men were to be seen at Patriarch's Ponds. The first of them--aged about forty, dressed in a greyish summer suit--was short, dark-haired, well-fed and bald. He carried his decorous pork-pie hat by the brim and his neatly shaven face was embellished by black horn-rimmed spectacles of preternatural dimensions.

The 17th Century. A lutenist from England is summoned to the court of Christian IV of Denmark and soon plays a key role in courtly life. But a dual role, which tests his character and his loyalty.

Music is the thread that holds the narrative together, it's restorative, it promotes harmony, but its absence is just as profound.

Tremain's choice of setting is masterful. Society is in flux here. New sciences are confounding previously held beliefs giving way to Protestantism. The king himself advocates freedom of thought and the abolition of slavery.

Facts contradict each other in a world of constant self-conflict.

First lines: A lamp is lit. Until this moment, when the flame of the lamp flares blue, then settles to steady yellow inside its ornate globe, the young man had been impressed by the profound darkness into which ... he had suddenly stepped.

A unique novel from the end of the 19th century that almost redefines the idea of confinement by giving it a metaphysical edge, but Wilde's aureate and disarming prose will take you to places you've never been and make you think about beauty in a new light.

A young man, under the influence of an older, established socialite and wit, desires to keep his moment of perfection as it is rendered by his portrait painter. But at what price?

Soon the cracks begin to appear in Dorian's perfect world, and, as time inexorably passes, his universe deepens and darkens until a crisis of the soul brings about the most extraordinary ending.

**First lines: **The studio was filled with the rich odour of roses, and when the light summer wind stirred amidst the trees of the garden, there came through the open door the heavy scent of the lilac, or the more delicate perfume of the pink-flowering thorn.