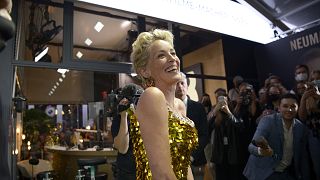 Sharon Stone says that she’s had more work offers in recent months from Instagram than when she had professionals representing her.

The actress was speaking at the Zurich Film Festival, where she collected a Golden Icon Award for her work on movies including Basic Instinct, Total Recall and Martin Scorsese’s Casino, which was screened after the presentation of her award.

I think with agencies, they take your offers and discuss them at board meetings and discuss whether they might be better for another client

Stone, now 63, told reporters at the festival that she had been “pretty much fired by everyone” representing her in the run-up to the release of her memoirs this year, The Beauty of Living Twice, which deals with her recovery from a brain haemorrhage in 2001, as well as sexual abuse in her childhood and sexual harassment in her acting career.

“I did not have agents or managers for a while, and I still don’t have an agent, though I do now have a manager,” she explains. “For a long time, I was contacted directly, or through Instagram. And I found I had a lot more offers than I did when I had an agent. I think with agencies, they take your offers and discuss them at board meetings and discuss whether they might be better for another client, so I don’t think you get all of your offers.

“I can only imagine this as I was getting zero offers, but when I didn’t have an agent the very next week, I was getting six, ten, twelve offers. I don’t think that would happen instantly if it wasn’t the case. I’m now just trying to take my time with projects.”

Asked who her dream collaboration would now be with, Stone replied that the New Zealand director Taika Waititi was at the top of her list, but added, “I’d like to work with some actresses. Much of my career has been me and 250 men on set and while I’ve learned to speak man rather fluently, I would really enjoy working with some actresses, and lots of them.”

Stone has recounted in her book how an unnamed filmmaker made life difficult on a film set because she ‘refused to sit in his lap and take direction.’ Nothing was done, she says, to address her concerns. She also claimed a producer suggested she sleep with her male co-star to improve their chemistry. She and her sister also decided together to reveal in the autobiography that they were abused by their maternal grandfather when they were children.

Asked why it took her a while to talk about the incidents, Stone replies that “I never waited, I spoke about situations at work and beyond, it took a long time for anyone to listen to me.

“It’s a very delicate situation to be one person and lots and lots of men. I never thought of myself as a feminist, actually, as my father was such as hardcore feminist, that was just the way things were at home. He’d call me in from playing and say, ‘you’re not trying your best as you want the boys to like you, now go out there and win.’ So, I’d go out there and win, and none of the boys would like me – which has been a lot of my problem in life.

“You have to learn to win, and win – as a woman there’s a complex balance in that. You have to work within a system owned and operated by men. I was fired before my book even came out and no one had read it, these are the realities of life.”

After receiving her award and watching a video of her career highlights, Stone also gave a masterclass at the festival, telling fans she is “really grateful that women in the industry are getting to work, but I didn’t get to work for 20 years between the age of 40 and 60. When I was looking at that video, there was all this work, then no work, then Ratched (a 2020 TV series.) When I turned 40, that was it – no more work for Sharon.”

Stone, who is also Global Campaign Chair for the Foundation for AIDS research, amfAR, said that in some ways the lack of acting work was beneficial.

“I got time for medical research and raise my children. Alhough financially it wasn’t great, karmically it was really great.”

The actress says she rates her work on raising money for AIDS research as one of her greatest achievements in life, along with learning to speak in public and raising her three sons.

“I am so shy and I learned to speak in public, as when I was young, just standing up in church and having to talk, the tears would fall,” she remembers. “Learning how to do things like that has been wonderful, as being able to do it has helped me raise money for AIDS awareness and being able to speak to scientists and doctors. That has been, for me, my greatest achievement. And as any person will tell you, there’s nothing like being a parent. No one can tell you what it’s going to be like, and then you do it, and it’s everything.”