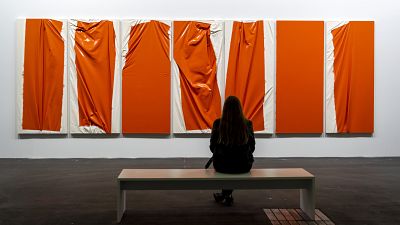 The artwork Diablo Prime (1992) by American artist Steven Parrino is on display at the show Art Unlimited in the context of the international art show Art Basel   -   Copyright  GEORGIOS KEFALAS/AP
By Jez Fielder  with AP  •  Updated: 22/09/2021

Something's cooking in Basel. If you're looking to get a taste of what's happening in the global art market, there's no better place than Switzerland's sprawling Art Basel fair.

Created by Swiss visual artist Urs Fischer, an exhibit called the "bread house" is being exhibited as part of Art Basel's plus-size 'Unlimited' section. After all, there's nothing so evocative of memories as the staff of life itself.

"It's a piece which touches everyone, I think, not only because bread is a very common thing or common metaphor for everybody, but also because it's a piece of art that smells and talks about decay and it's a very poetic piece but also on a sculptural point of view, I think it's surprising to see using bread to build basically a one-to-one house," says Giovanni Carmine, curator of Unlimited.

Almost bursting from the convention centre walls, 62 large-scale works are appearing, including David Hockney's 'Pictures at an Exhibition'.

Over 270 galleries from around the world are exhibiting at Art Basel 2021, which is back in the physical world.

"For him, having an imposed lockdown has meant no visitors, no studio visitors, and in some ways, despite the tragedy of the pandemic, for him it has been liberating," he explains.

"He has this very intense work ethic which means that at 87 years-old he still has to go to the studio to make art as long as he is physically fit. So in a sense the pandemic has been a gift to him to free him from all other constraints and to just say: get on with the work, Frank."

There may be fewer buyers from the United States and South America attending in person, due to ongoing travel restrictions, with the art market bouncing back strongly after 2020 this should not preoccupy galleries too much.

Despite continued COVID-19 restrictions and economic uncertainty, the outlook remains positive, with sales in the sector growing by ten percent, according to a recent report.

A survey of over 700 dealers conducted before the fair found over half (51 percent) saw an increase in sales in the first half of 2021, compared to the same period in 2020. Sales in the sector as a whole increased by ten percent.

"When there's great art in the market, there is demand and if anything we saw a lack of supply at various points during the last year and a half because collectors were unsure about putting things onto the market at auction or selling through a gallery," says James Sevier, head of contemporary art, Europe, Sotheby's.

"But I think that the market has remained strong, the prices have remained very strong and in fact we've seen prices going up because of the lack of supply."

"There's more collectors now who are looking at adding to their collections than we had early 2019."

Art Basel opened with media previews on Tuesday 21 September. The general public are invited to attend from Friday 24 September to Sunday 26 September.