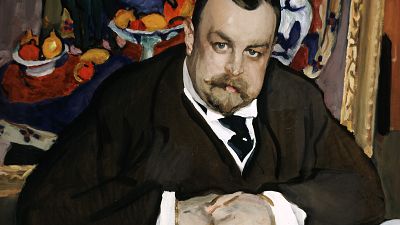 The Morozov collection is finally going on show.

Three times postponed, thanks to you know what, this exhibition will open its doors on Wednesday in Paris, one year after the scheduled opening date.

The Morozov collection presents 200 paintings, sculptures, photographs and is the second show devoted to major Russian collectors, after the Sergei Shchukin exhibition (2016-17) which attracted a record 1.29 million visitors.

After passing through a door decorated with a high relief, a replica of the sculpture at the entrance to the Moscow Art Theatre, the visitor meets the "Morozov clan", family and friends of the brothers, Mikhail and Ivan. Then follow one another through the rooms of works by Manet, Renoir, Toulouse-Lautrec, Monet, Picasso, Gauguin, Bonnard, Vuillard, Rodin etc.

In a separate room, a little-known Van Gogh captivates with his 1890 work "The Round of the Prisoners".

Mikhail and Ivan Morozov were born in 1870 and 1871 into a Muscovite family of textile manufacturers, of serf origin. Their mother gave them an artistic education with drawing lessons by Russian artists.

It is perhaps from there that comes the exceptional acuity which the two brothers show in their purchases of paintings, suggests Anne Baldassari, the curator of the exhibition.

Mikhaïl, the eldest, traveled and acquired his first paintings in Paris at the age of 20. He is considered daring by choosing to buy Van Gogh and Gauguin, who were not at all recognised at the time, says Baldassari. It was he who brought to Russia, for the first time, works by these two painters.

He died young at 33, but his collection already included 39 paintings by notable masters such as Monet, Toulouse-Lautrec, and Renoir.

Ivan then takes over the family business and puts on hold his painterly ambitions. He, too, buys in Paris, in a less unbridled way than his elder brother, but with an eye just as sure.

Impressionists, post-impressionists, Les Nabis (young French artists that helped inspire the move to abstract art at the end of the 19th century) and above all: Cézanne. Ivan's taste also stretched to contemporary Russian painters.

Picasso fans will be delighted by the three pieces on show. They are Ivan Morozov's collection and, according to Baldassari, they are "all masterpieces and markers of Picasso's body of work from key evolutionary moments in his career."

The exhibition is organised in collaboration with three Russian museums - The State Hermitage Museum (Saint Petersburg), the Pushkin State Museum of Fine Arts (Moscow) and the State Tretyakov Gallery (Moscow).

This exhibition represents the first time that this extraordinary collection is presented outside of Russia.

It opens on Wednesday 22 September and runs until 22 February 2022.