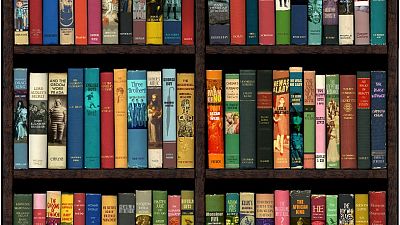 To prove that Gender can be confusing in any period, artist Phil Shaw has masterminded two contemporary art masterpieces, namely G_ender Studies 'His' _ and _Gender Studies 'Hers'. _

On visiting the Art Paris Art Fair earlier in September, my attention was drawn to a large print hanging at the rear of the Rebecca Hossack Gallery showcase. A colourful bookshelf with very inviting spines. I soon found myself laughing out loud and attracting the attention of the curator. I am looking at 'His'.

I can see an edition of The Merry Husbands of Windsor featuring the faces of the males of the British Royal Family (and Mark Phillips!) nestled next to Agatha Christie's The Amazing Mr. Marple, with David Suchet (famous for his portrayal of another Christie detective, Hercule Poirot) as the illustration.

Switch to 'Hers' and you'll find Bernard Shaw's Arms and the Woman, replete with a picture of the Venus de Milo, just along from a copy of Ladies Prefer Blondes, with the tousled bonce of Boris Johnson peeking out at you from these seductive shelves.

The artist, Phil Shaw, cites "global fuss" over sexual identity as the catalyst for this creation. But for him the work is less about transphobia headlines and more about perspective and offering alternative stories.

"It subverts the way we think about literature, it presents you with a new perspective, a fresh look at things," he adds.

I ask Shaw if the work is a comment on the Structuralist school of literary criticism, particularly Roland Barthes who announced the 'death of the author' in 1967 and rejects attribution (despite signing his own essay).

Shaw's having none of it. "I’m afraid I don’t find Barthes all that interesting - he’s too obvious."

"All about Yves," he says. And sure enough, top shelf, left hand side, there it is, with a dashing picture of Yves St Laurent, naturally.

Royal Academy Summer Exhibition 'not all doom and gloom'

Here’s why we should raise boys like girls | View