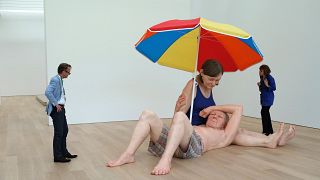 Ron Mueck produces eerily lifelike human figures, detailing every aspect of human life from the banal to the dark.

He was born in Australia but has spent most of his life in the UK, where he worked producing models for film and advertising.

25 years ago he switched to the fine arts and his success was instantaneous in the art world.

Much of his work details snapshots of everyday lives, for example an elderly couple sat on a beach.

But with the richness of his sculpting and the intricate detail in his work, there is always much more beneath the surface.

The work that catapulted Ron Mueck to stardom in the art world was shown in London 25 years ago.

It is a sculpture of his father, who had recently died in Australia.

Dead Dad caused a sensation when it was shown at the Royal Academy.

In Mueck's work Woman with Shopping from 2014, the artist explores the pressures of motherhood.

A young woman is weighed down by her shopping bags and with a baby strapped to her chest.

The physical closeness of mother and child is at odds with the blank, void of expression in the woman's face.

A similar work Mother and Child from 2003 shows a newborn baby lying on its mother's stomach.

The umbilical cord is still attached and the complex psychological response the mother is feeling at the sight of her child is a moment frozen in time by the artist.

Looming over the Mother and Child, emerging from the darkness is a sinister face from the artist's work Dark Place (2018).

It is the first time this work has been exhibited and the subject's inner turmoil inspired Mueck to create this dimly lit sculpture of a man in turmoil in his middle-age.