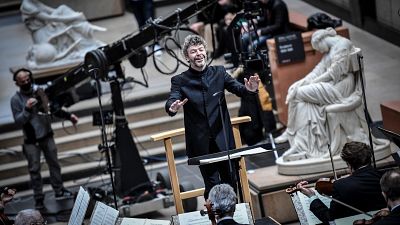 The Paris Orchestra has found a new audience among the statues and paintings of the city's Musée d'Orsay.

To compensate for the lack of authorised public performances in France, the ensemble is to play a live concert from the venue on Saturday and bring the music direct to an audience via live streaming on the museum's website and on the French music TV channel Mezzo.

"The idea is to be able to welcome a virtual audience, to let them enjoy this concert that was planned and then for them to be able to see perhaps in more detail what they would not have seen otherwise, that is to say, everything that the museum can offer: the paintings, the sculptures, everything that we, we, can bring in addition to what the Paris orchestra brings," explained Sandra Bernhard, the music programmer for the museum.

Overlooked by the statues of Rodin and the art of Courbet, the orchestra will interpret the compositions of Ravel including his famous 'Bolero'.

The musicians will be led by young Spanish conductor Pablo Haras-Casado.

The concert will be broadcast this evening, Saturday, at 830pm Central European Time.