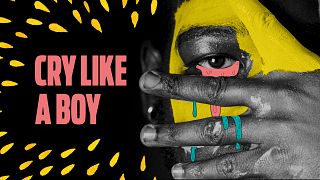 From Burundi to Senegal, from Liberia to Lesotho, travel with us across Africa to discover the stories of men buckling under the pressure to conform to traditional male gender roles, and meet those who are defying centuries of stereotypes.

Don't show your emotions, be strong, be the breadwinner, don't let a woman tell you what to do, be aggressive, don't express your fears: these phrases are drummed into many men’s heads from childhood, telling them how to behave like "real men".

The problem with these attitudes is that they do not only harm women, but also men themselves, as they suffer from their efforts to “man up” and feel embarrassed when they are not able to fit this stereotype.

We still live in societies where men feel safer killing themselves than acknowledging pain: although men report lower rates of depression than women, they are far more likely to commit suicide.

The COVID-19 pandemic is a moment of historical upheaval and a chance to reassess ideas about how men should behave and what counts as strength and weakness.

With the aim of promoting global discussion on healthy masculinity, Euronews is unveiling a one-year-long editorial project called “Cry Like A Boy.”

Featuring the first flagship podcast produced by Euronews, “Cry Like a Boy” will bring you surprising stories of men defying centuries of stereotypes.

We are travelling to five developing African nations to show that finding new ways of being a man is a universal challenge and, most importantly, that men need to step up and be part of the solution to the lingering issues at the root of gender inequality.

While the focus is often on macho culture’s subjugation of women, we look at how men in African countries are also suffering from society’s expectations, as they struggle with rigid gender roles, traditional rites of passage and immense pressure to marry and become breadwinners.

Stories from Africa include new dads taking classes to learn how to be better fathers, men living with HIV learning to support each other, communities of men taking up tasks traditionally considered “women’s work”, and an older generation finding the courage to open up about the scars of war.

Stay tuned and share your stories with the hashtag #CryLikeaBoy

The journalists and producers: Marta Rodríguez Martínez, Naira Davlashyan, Lillo Montalto Monella, Arwa Barkallah. Do you want to get in touch? Email us at CryLikeBoy@euronews.com

More than 10 years ago, Innocent was a violent man who splurged all the family's wealth on his 27 lovers. But then something changed. He met a group of rural men who have led thousands to rethink the whole idea of what being a man actually means in Burundi.

Junior, a young Senegalese man, reveals a secret he’s kept from his family and his closest friends, for fear of not only rejection, but persecution and even imprisonment. The secret is that Junior is gay. Euronews explores what it means to be gay in Senegal, where homosexual men are targeted with the slur “Góor-jigéen” - a pejorative term which literally means “men-women” in the Wolof language, and is used to belittle their masculinity.

How far are you willing to go to provide for your family? Would you put your life at risk to put bread on the table? What if you had no choice? There is a country in Africa where thousands of men have felt so much pressure to provide for their families that they are employed by criminal gangs as illegal miners, digging for gold in clandestine mines. In some cases, they will never see the light again. We are in Lesotho, a tiny enclaved country within South Africa and the third place we are visiting as part of the podcast, Cry Like a Boy.

Meet the African musicians using their voices for social change