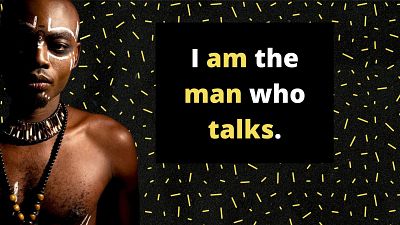 “I don’t come to you with my problems because you’ll think I’m weak.”

Among the rubble of piercing words that spewed from my father’s mouth, many of them insults; these stung the most, because they gave me an awakening. They told me that something was going on - something I had not understood and yet it informed his way of life, his worldview, his self-perception.

Mother’s clothes and shoes lay scattered all over the bedroom floor. A stench of desolation hung in the house. I asked father why he did it. He said it was the anger. Anger made him do it.

I feared my 13-year-old sister would be scarred by the mess if she saw it. So I locked the room before she returned from school.

Mother had stepped away to her cousin’s, to breathe for a week, her heart heavy with the brutishness and ambiguity of an umpteenth argument. She was tired, but wasn’t leaving for good. I thought I didn’t want her to, but in my heart of hearts, I badly did.

I was exhausted too, and decided that when she’d return, I’d call them both for a meeting, which felt like a suicide mission. Because you don’t sit your parents down to talk to them about how they ought to run their house. After all, “what does a child know?”

This is a question society asks by making children voiceless in their homes. They are there to follow orders, eat, and go to school. They taught us in school that children were important in the African family because they were both a matter of pride for their communities, and a source of labour. But they didn’t say children had eyes too, and that their ears are razor sharp. They could cut words into emotions, perceive them deep within the abyss of their little consciousness, and create meaning. Children, they didn’t say, were the holders of a society’s purity.

We sat with dad on the dining table when he uttered these words - that I’ll think he’s weak. Something knocked in my head. I asked myself, what might have made him say that? How did he not think that all the years I’d spent living with him, I could count his weaknesses by the breaths I took? Did he think I viewed him as a human god who got everything right? That seemed to be the image he believed he was portraying all this time.

So I started speaking to my uncles about their childhood, and the stories started stringing together. Stories about how grandpa would hurl things at them. At everyone. How he had beat their mothers (polygamous home) in front of them, and had emotionally abandoned them from when they were very young. Trauma. It was all trauma. It’s the first time I saw my father as a human being. A boy screaming for help, but trapped in a man’s body. I also understood the anger that informed his violence, but I would never excuse it.

That was the onset of my healing journey.

We had only been good friends before I was seven. He’d buy me newspapers and guide me through difficult words while I sat on his assuring lap. He took me to football matches and we chose sides when games were screened on TV on weekends. We’d take evening walks and he would drop by his friends’ homes for tea.

But that man changed with time. He got angrier and emotionally distant. He drank uncontrollably and beat us up. He’d lift me off the ground and throw me against a wall, stomp on my head, or jab my arm repeatedly. Once, he burnt my palm for when he suspected that I stole a Bill Cosby novel that belonged to a student he tutored.

I suffered a lot, emotionally, approaching my teens. I had episodes of depression, closely followed by thoughts of suicide. I wrote everything down. I felt that if I didn’t say something, I would die, because there was no safe space to express my emotions at home. Everyone was angry and shouting most of the time.

I have never forgotten my father’s words. “I don’t come to you with my problems because you’ll think I’m weak”. That was hella powerful, and probably the most vulnerable he’d ever been to me. As I became a man, I saw those words in the men around me. The men on TV. The men in public office. The men who were my teachers at school. They had long and angry faces that kept saying they couldn’t talk because everyone would think they were weak, and I’d think to myself, ‘what a tragedy!’

So I decided to head in the opposite direction, and be the man who talks, to free myself from the burden of locking up my pain out of fear of emasculation. I had already been so battered in my home, I felt I had nothing else to lose. What would it do to me if another human being felt I was weak for expressing my emotions in a healthy way? Would my feelings mean any less? Would my mind stop working? Would I die? What’s the worst that could happen? It was a narrative that so many men feared interrogating, because of who they had been told they ought to be. Many of them were not ready to attempt to be different.

I saw the damage the machismo caused. Pain all around and within me. Much of it rooted from lacking the skills to communicate one’s feelings effectively, along with the need for a sense of belonging and acceptance in the male family. So I figured, if I have to be all this and yet live in pain, then fuck it all! I SHALL SPEAK!

Onyango Otieno is a writer, poet and mental health advocate in Nairobi, Kenya. His work centres on African Masculinity and its role in ensuring gender equality and equity. He is the founder of a 200-member online mental health support group where members use storytelling to tackle the stigma of mental illness. He is also the host and producer of the Afro-Masculinity Podcast.

Podcast | Solutions to domestic violence from Burundi to Europe Pt. 2