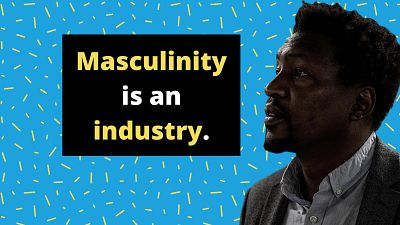 The first time I remember really crying like my life depended on it was in the mid-1980s. My father, African writer Ngugi Wa Thiong’o, had been in exile for a year or two because of his political writings. We were perpetually broke and under constant harassment from the Kenyan government. So things were tough at home.

One morning, my sister and I began to fight over a leftover piece of mandazi, a sort of fried bread. It was too much for my mother, so she locked herself in her bedroom and began to cry. My sister and I stood by her door and cried as well. We couldn’t bring ourselves to eat the mandazi anymore, so we drank tea and went to school. I often wonder now whether I cried because of hunger back then, or because I saw myself as a future man who was unable to provide for his family.

In my mind, I grew up in a feminist home. Seven children - four boys and three girls - with a father in exile, and two dead grandfathers, we were a family held together by our mother and two grandmothers. My paternal grandmother used to hide bullets for my uncle, who had joined the armed resistance against British colonial rule in the 1950s. She would tell us folk tales and stories about the resistance. Some of the stories were funny, like the one about my father cowering when his elder brother visited, because he was afraid of his dreadlocks. There was also the one about my uncle risking arrest to come home and wish my father luck in the national examinations. My uncle was right to do that, because my father would grow up to become a contender for the Nobel Prize in literature. My other grandmother was the embodiment of independence. She was fierce, loving, a hardcore Christian, and a lifelong supporter of black wrestlers in the WWE matches on television. One of our neighbours was a woman married to another woman. Amongst our people, the Gikuyu, women could marry each other. Granted it was strictly along patriarchal lines, where a woman of means married a poorer woman, becoming a de facto man. We took it all for granted.

So, in spite of this organic feminist upbringing, how did I become a “man”? It happened early one morning, when I was about 14. My uncle drove me and my male cousins to our family doctor. I remember the crunch of the scissors on my foreskin, which had been numbed by local anaesthesia, and the doctor saying, “we have a bleeder”. He threw the piece of foreskin into a receptacle and stitched me up. My cousins and I had become men of the same riika (agemates). At home, I now had my own room and, soon afterwards, I was able to move into what we called a cubicle - a space reserved for circumcised men. So, just like that, I was a man. With the pain of a morning erection stretching against the circumcision sutures, I was a man in pain. The worst thing you can do during circumcision and healing is to cry. So I took the pain like a man.

I also remember the last time I broke down and cried. It was a few years ago. My family and I were moving and going through my things in my office, when I came across an old passport with a black and white photograph of my mother. She would have been nineteen or so in the picture. She was not smiling, but it was her stare, determined and yet vulnerable, that broke me. Of course, even as I cried, I knew I was seeing her through my eyes today. The questions in my mind were, “did she somehow sense what would become her life?” “The joys and the tragedies, and that in twenty years she would eventually die of AIDS?”

With all that I know now about being a man, what would I tell my ten-year-old daughter (who we named after her grandmother)? I would tell her to fight! Always fight, and always be vigilant, because behind the most patriarchal or feminist of men, there is a man. Yes, it is intersectional, and interconnected, but the default is to reward patriarchy.

Being a man - masculinity, sexism, and patriarchy - is a multi-trillion-dollar industry. It is an ideology that feeds profit over humanity, and institutionalises the exploitation of women - according to Oxfam, unpaid women’s labour adds at least $10.8 trillion to the economy.

With what I know now of myself, and masculinity, I would tell my daughter that there are no true male feminists. Ideologically, I align myself with radical black feminism through the Angela Davis’ and Audre Lordes’ of the world. But it is so easy to be blind, and to take advantage of a system designed for men. The default is us. So I would tell her that there are no male feminists in the end, only whistleblowers.

So fight them all, for all of us!

Mukoma Wa Ngugi is an Associate Professor of English at Cornell University and the author of The Rise of the African Novel: Politics of Language, Identity and Ownership, the novels Mrs Shaw, Black Star Nairobi, Nairobi Heat, and two books of poetry, Logotherapy and Hurling Words at Consciousness. Unbury Our Dead With Song (a novel about competing Tizita musicians) is forthcoming from Cassava Republic Press (Fall of 2020).

The pandemic can change the domestic power balance | View