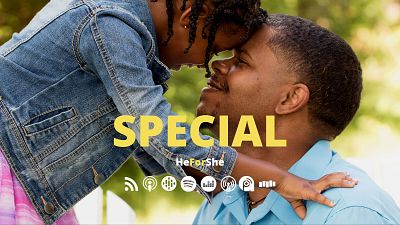 When asked why he believes men should be involved in achieving gender equality, Edward Wageni responds: “Gender equality is not just about women and girls”.

“In most countries, almost 50 percent of the population is men and boys, and the other 50 percent is women and girls.”

Wageni, director of HeforShe, a UN initiative that focuses on engaging men and boys to achieve gender equality, admits that they face a number of challenges while working with men.

HeforShe has numerous famous ambassadors, among them is actor Emma Watson, who was one of the first voices of the campaign in 2014 with a speech that quickly went viral.

In this episode of Cry Like a Boy, we talk about how initiatives such as this one are paving the way to gender equality for everyone.

This is a special spin-off episode of Cry Like a Boy hosted by Mame Peya Diaw and produced by Naira Davlashyan and Marta Rodriguez Martinez.

If you want to listen to the first season of Cry Like a Boy, a podcast that takes you on a journey to 5 African countries to meet men who are challenging gender stereotypes, click here. You can also listen to it in French under the name Dans La Tête Des Hommes.

The hurdles migrants face in making it and failing