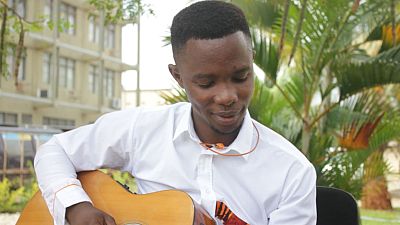 To be a man in Burundi, like in many other places in the world, one must build a house, plant a tree and father a son. But Yves Kami has a different opinion.

“I’m a musician to be useful to society”, says the young Burundian artist, who’s been devoted to music since he was 5 years old.

The melodic songs, that made him somewhat of a local star, tell a story of a man who wants a better future for his home country. And that means more rights for women.

With his lyrics, he wants to become one of the drivers of change. Burundi's past and present are his main inspiration.

“My genre of music is Afro-blues and I try to mix Burundian drums with modern music.”

_Play the video at the top of this page to hear Yves Kami play one of his songs, Iyengenge. _

Y__ou can also check the rest of his work on his Youtube channel, Spotify, Apple Music, Deezer or Amazon Music.

In 2021, Yves Kami has participated in international festivals, such as the Sauti Mpya Festival in Tanzania. He is also working on a new album from South Africa, which will be released in summer 2022.

Yves Kami's music is featured in the first two episodes of the podcast Cry Like a Boy on the Abatangamuco, a group of men who one day decided they had to stop abusing their wives and are now promoting a gender equality revolution in Burundi.

A decade ago, Innocent was an abusive husband who beat his wife and squandered the family's money on extra-marital affairs. Then he met a group of men who have led thousands in Burundi to rethink their behaviour and change their lives.

We continue the story of Innocent, an abusive husband who changed his ways, stopped hitting his wife, and ended up becoming the most influential man in his village. We also explore the reasons behind his transformation.

Cry Like a Boy is a podcast that explores how the pressure to "be a man" can end up damaging societies and families and tells the story of men who challenge centuries-old stereotypes.

Listen here to all the episodes of Cry Like a Boy. And if you speak French you can also listen to them here in French with the title Dans La Tête des Hommes.