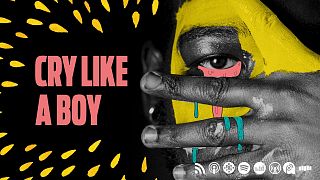 Cry Like a Boy is an original podcast series from Euronews that looks at the stories of men in five African countries who are challenging what it means to “be a man” in their societies, and campaigning for gender equality.

Through on-the-ground reporting by local journalists in Burundi, Senegal, Lesotho, Guinea, and Liberia, and in-studio discussions that bring together African and European perspectives, this series looks at how the men are changing themselves and their communities.

1 - The Abatangamuco in Burundi: The Theatre

A decade ago, Innocent was an abusive husband who beat his wife and squandered the family's money on his extra-marital affairs. Then he met a group of men who have led thousands in Burundi to rethink their behaviour and change their lives.

2 - The Abatangamuco in Burundi: The Couple

We continue the story of Innocent, an abusive husband who changed his ways, stopped hitting his wife, and ended up becoming the most influential man in his village. We also explore the reasons behind his transformation.

3 - The Abatangamuco in Burundi: The Lessons

We look at the solutions to domestic violence in Burundi, and across the world, as well as exploring what the Abatangamuco could teach European men.

4 - The Abatangamuco in Burundi: The Solutions

In this episode, you will hear how an advertising campaign in Norway made men question the toxic and destructive aspects of their masculinity. We will also discuss how the involvement of men from communities, not just women, is important in achieving gender equality.

5 - The Góor-jigéen in Senegal: The Secret

Junior, a young Senegalese man, reveals a secret he’s kept from his family and his closest friends for fear not only rejection but persecution and even imprisonment. The secret is that Junior is gay.

6 - The Góor-jigéen in Senegal: The Past

A few decades ago, some Senegalese men openly identified themselves as not male or female, but as an alternative gender - the “Góor-jigéen” or “men-women”. Senegalese society accepted them, and they moved about freely in the streets of Dakar and other towns, dressed as women.

7 - The Góor-jigéen in Senegal: The Coming-out

In this episode, we will see how in Africa but also in countries like France, being homosexual could be a lifetime burden. A lot of them will choose their happiness over the respect of society's "rules".

8 - The Góor-jigéen in Senegal: Sexual colonisation

What are the origins of homophobia in Africa? Where do the laws that punish same-sex relationships come from? South-African activist Khopotso Bodibe speaks to Youssef Belghmaidi, a Moroccan trans woman activist based in France, and Sheba Akpokli, an LGBTQI+ rights activist from Togo, about colonialism and its impact on sexual diversity and education.

How far are you willing to go to provide for your family? Would you put your life at risk to put bread on the table? What if you had no choice? There is a country in Africa where thousands of men have felt so much pressure to provide for their families that they are employed by criminal gangs as illegal miners, digging for gold in clandestine mines. In some cases, they will never see the light again.

There's an impoverished mountainous district of Lesotho where many illegal mineworkers live with their families. But women often wait there for their husbands for months and sometimes years.

We sit down for a moment of reflection and talk about the unknown world of the zama zama with two guests: Mpiwa Mangwiro, who has explored the social consequences of the extractive industry in South Africa in her role as Advocacy Specialist for MenEngage Africa Alliance; and Rosalind Morris, an award-winning anthropologist who has launched a project devoted to the zama zama, featuring a documentary and several short films.

The illegal miners, known as the zama zamas, not only put their lives at risk but also leave their families behind in countries like Lesotho and Zimbabwe for weeks at a time. In this podcast, we explore how men's desire for status can be destructive for families and how future generations are impacted by growing up with absent fathers.

13 - Tounkan namo in Guinea: The Hero

After the death of his father all Mamadou Alpha wanted was to get his mother out of poverty and become her hero: The perfect son, the man of the family. At 18, he embarked on a dangerous migration route to Europe. Thousands of adventurers die trying to cross the Mediterranean in search of a better life. But Mamadou survived. Yet, he considers his fate worse than death.

14 - Tounkan namo in Guinea: The Adventure

Fana is only 18 but he feels he became a man at the age of 12 when he decided to go on an adventure and leave his home in Guinea, seeking a better life in Europe.

Many African migrants who take the dangerous journey into Europe will not make it. But the few who succeed in reaching their destinations still face hurdles. In this episode, Khopotso Bodibe talks to South African lawyer and rights activist Sharon Ekambaram and Julie Kleinman, an American anthropologist and author of the book “Adventure Capital: Migration and the Making of an African Hub in Paris”.

When young guys like Mamadou don’t succeed in their dangerous adventure from West Africa to Europe, they’re often not welcome back home. Why is there such pressure for men to succeed and how does this affect women? And how does climate change and global issues such as COVID-19 affect migration and the road to success for the immigrants? What can governments do to make things better?

Liberia’s brutal civil war pushed soldiers and masculinity to the extreme. Jonathan and Morris had to show strength even when they feared death.

18 - The soldiers in Liberia: The invisible wound

After witnessing the murder of his parents and siblings, Morris Matadi was recruited as a child soldier. They put a rifle in his hands and forced him to take an active role in the Liberian civil war. One day he managed to put down his weapon and flee. But, like many other ex-combatants, the horror of war did not leave him, at least not mentally.

Liberia witnessed a spiral of violence, hunger and death for more than a decade when the country's women said enough was enough and united to end the war. They came together regardless of their origin, class or religion.

20 - The soldiers in Liberia: My voice was a weapon

Cecelia Danuweli realised she had the power to change the course of Liberia’s war in 2003. Then she joined a group of brave women, Women in Peacebuilding Network (WIPNET), who organised peaceful protests in front of the warlords. Their actions had a better range than bullets.

In Cry Like Boy, we have spoken about the trauma caused by Liberia’s civil war. But conflict is a global issue. In this new episode, we ask UN's Adama Dieng about the impact such a violent act as genocide can have on men, women, or victims of rape. And what can be done to prevent genocide.

22 - Being queer and masculine

In this episode of Cry Like a Boy the author of the critically-acclaimed memoir ‘All Boys Aren’t Blue’ Georges M Johnson addresses the questions about race, identity, and gender.

23 - The challenges of men working with men

In this episode of Cry Like a Boy, we discuss the challenges that HeForShe director Edward Wageni faces working with men and why gender equality is good for everyone, not just women.

Cry Like a Boy is published every two weeks in English and also in French under the title Dans la tête des hommes.

Here's how we created this multilingual podcast between Africa and Europe without getting on an airplane.