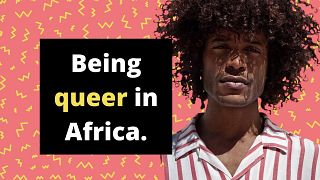 My first experience with toxic masculinity goes back to when I was a toddler.

I was in a mall with my parents and wanted to ride one of those moving machines that you find in amusement parks. This one was a tiny Donald Duck. My father thought the “toy” wasn’t masculine enough and, instead decided to put me on another ride, which was a helicopter that sat a bit higher off the ground. It was bigger, and actually, unsafe for a little child. When the helicopter started moving I was so scared that I couldn’t stop crying and yelling, as I stretched my arms for him to take me back. But he didn’t, and laughed instead. This very situation developed in me a new fear: a fear of heights. I still suffer from vertigo today. Thinking back, maybe this was his distorted idea of how he could initiate me into a tough world.

Growing up a queer child in Africa is dangerous because of all the rules around how a man is expected to behave in society. And for me, they were particularly strict.

My father was a military man, as were most of the male family figures he had as references. His name, Gaspar, was inherited from his uncle Gaspar da Silva, who was an army general.

That military-like energy was one I had to face everyday as a child. There was no space for me to be who I was organically learning to be, because my parents acted as if they knew exactly what to do every time I showed a little sensitivity.

I remember thinking most of my cousins, uncles, and acquaintances, were aggressive with me when I was younger. “Boys don’t cry”. “You look like a girl”. “Do you want to be a little girl?”. Sentences such as these, have echoed in my mind for years. They pushed me away from my true essence.

Growing up, the abuse became as naturalized as the pain. Which meant that regardless of the consequences of being caught, dressing up like a girl, and playing with dolls and make up became my identity.

My father was murdered in 1989, when I was around 7 years old. I blamed myself for it because I thought I had wished that upon him, which made the trauma of his death even worse. My mother was cast out of the family because she had refused to marry my father’s closest cousin after his death, which was tradition. From that moment on, I was raised by women: my aunts and grandmother.

I thought my father’s death would have made my life a little easier, but I was wrong. Because the way our society is structured has made women also perpetuate the toxic masculinity that they themselves face and endure.

I witnessed more violence than I would have liked to, even within my household, because of disagreements over the way I ought to be treated.

In most societies, ‘hyper masculinity’ and its attempt to remain hegemonic, has had some people pay a very high price, such as homosexuals, minority ethnic groups, migrants, the poor, and those subject to labor exploitation.

I remember at the age of 8, I tried getting out of the house dressed in my sisters’ clothes, demanding that everyone call me Paula. I got beaten up by a group of boys. I knew some of those boys were secretly into it. But if any of us got caught in any of these acts, they would always be met with violence.

During my childhood, Angola was embroiled in a civil war between The People's Movement for the Liberation of Angola (MPLA) and National Union for the Total Independence of Angola (UNITA) until a peace agreement was signed in April 2002. I had escaped the fighting earlier, in 1994, when I was sent to study at a boarding school in Spain.

One of the main reasons my family had sent me abroad for school was because they knew that my life in Angola would have been too difficult if I hadn’t left, because of the way I was. I was sent to a seminary in Spain, San Agustin. There I began to think that perhaps devoting my life to God would be the best option for me, and focused on studying theology.

Fast forward to today, few things have changed. We live in an age when people in many places around the world are able to demand equal rights, and where the internet has brought a transversal and horizontal sense of reality. Yet, in many African societies, this reality does not include LGBTQIA+ people, and being a homosexual or simply a non-binary person, can be a death sentence. Religion is often the main justification, in these cases, when it is believed, and preached, that it is better to be dead than to be some sort of “sexual deviant”.

In 2013, back in Angola, I decided to come out publicly as a gay man, while I was speaking at TEDx Luanda. It was a huge step for me as someone who was in the public eye. After my talk was done I was advised by many people to leave the country because I was in danger.

It took me more than 30 years to find the strength to fight and position myself as the subject of my story. All in the midst of reading or hearing things like “Bantu men are not homosexuals”, “Homosexuality is a European importation” or that it is ”against the laws of God”, and that I needed to devote myself to God and be ‘spiritually healed”. That I was an abomination.

I have also had heartfelt conversations with friends and family members who have learned to accept me. However, they refuse to accept others. I’ve identified as gay for more than 20 years now, and there are still times when I have to police myself because of the fear of being rejected, cancelled, or emotionally drained.

I now live in Portugal, where we are starting to define racism and its structure, how it has mainly affected black people from the African diaspora, especially those from the former colonies, and how it is still an open wound that needs to be repaired. People gather to protest against the murders of black people like Bruno Candé Marques, an actor who was shot dead by a declared racist.

But while we do this, I wonder why people still turn the other way at the sight of a rainbow flag, and say that the LGBTQIA+ are not welcome in this fight.

This makes it ever more urgent that we rethink how we educate our young. Some professors and I have created a public petition to introduce a new discipline in Portugal called “Education for Citizenship”, with the intention of ensuring that our children learn about gender equality, auto-identity, anti-racism and more. The petition needs 4,000 signatures in order to be eligible to be presented to parliament. The link is in the bio of my Instagram account.

It is not easy to constantly have to defragment who you are, and put pieces of yourself in boxes so that you can avoid being mistreated. Being queer still has no representation in our collective imaginary. Discrimination is more easility fought with status. So if we have to occupy spaces that highlight our existences, may those be with the art that we make.

The system is perverse, but we need to keep fighting for equality, especially if we’re the ones in the middle of the arena.

Paulo Nuno de Azevedo Pascoalwas born in Lisbon and raised in Angola. He is an actor, dancer, model, designer, producer and humanitarian activist who focuses on African communities.

The pandemic can change the domestic power balance | View