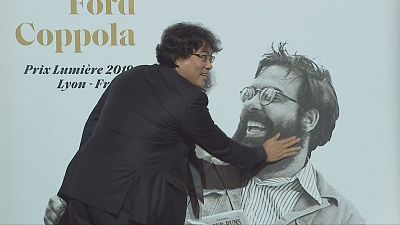 It was another accolade for the prized director of landmark films including The Godfather and Apocalypse Now.

Coppola's name joins a succession of big names who have been honoured since the prize was first awarded in 2009, including Clint Eastwood, Martin Scorsese and Quentin Tarantino.

But he was not the only attraction at this year's Lumière Film Festival in Lyon, with Ken Loach and Donald Sutherland among the star names present.

Thierry Frémaux, the director of the festival, said the prize for Coppola was a well-designated honour.

"He's a giant, a huge personality, because he's a great director and producer. He's also a winemaker, someone who alternates between extreme independence and the incarnation of great Hollywood adventures.

"We live in a time when the person who made the three Godfathers, and Apocalypse Now, and so many other movies, can come and be here with us, to receive the Lumière Award."

In keeping with the award's tradition, Coppola was invited to take the director's chair in a remake of the first motion picture ever made.

The Lumière brothers' first film La Sortie de l'Usine Lumière à Lyon ("Workers Leaving the Lumière Factory in Lyon") was shot in the city in 1895, and Coppola was at the helm for a recreation from 2019.

He also unveiled a plaque in his name on the Wall of Filmmakers, at the Lumière Institute.

The festival has become a success in recent years, with over 100,000 spectators and 180 classic films to see this time around.

Another attraction was Ken Loach, who drew a large crowd for one of several masterclasses that let the public question filmmakers.

His event contained a political debate about Brexit, but the British director tried to emphasise the importance of cinema too.

He also showed his new film "Sorry We Missed You", which tells the story of a family whose life is turned upside down when the father takes a job at a home delivery company — which strangely resembles Amazon.

French actor and director Daniel Auteuil, whose career spanning nearly half a century covers almost a hundred films to his name, was also honoured.

But the festival made a point of including his latest film Belle Epoque, which premiered in Cannes last May and is released in France in November, in the tributes — something the director said he appreciated.

Auteuil told Euronews: "I think that a tribute that would have focused only on the past would be very beautiful but it would have made me sad. But here we had a tribute given to me in the present, as my career continues, which is something that I find is encouraging to me."

Another star draw was Bong Joon-Ho, the Korean filmmaker who most recently claimed the Palme d'Or for his film Parasite.