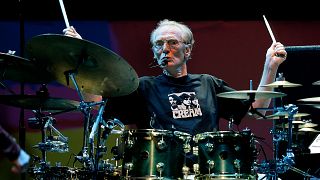 Ginger Baker, the drummer of British band Cream, has died at 80, his family announced on Sunday.

"We are very sad to announce that Ginger died peacefully in the hospital this morning. Thank you to everyone for your kind words in recent weeks," they wrote.

He was the drummer of British rock band Cream, a famous trio in rock history with guitarist Eric Clapton and bassist Jack Bruce.

Born in Lewisham, south London, in 1939, the musician started out in jazz circles, before replacing Charlie Watts in Alexis Corner's band in 1962, when Watts left to join the Rolling Stones.

He then went on to be a member of Cream and became a rock legend.

In 1968, when Cream disbanded, Baker joined another legendary band, Blind Faith, which also lasted a short time. He then created the Ginger Baker's Air Force, with organist Stevie Winwood. He created a drumming school in Milan in 1980.