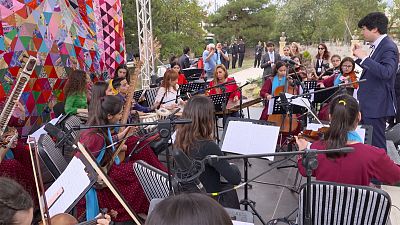 Kicking off in Baku, Azerbaijan is the second edition of The Nasimi Festival of Poetry Arts and Spirituality.

A multi-disciplinary festival that bears the name of the great 14th-century poet, Imadeddin Nasimi (1369-1417).

The festival is a melting pot of events including poetry readings, traditional crafts, music and dance ensembles all united by a message of compassion.

"Precisely because we’re in an age where everything gets quicker and faster with all these gadgets and apps, but I imagine that some rappers or modern poetry slammers might be inspired by the way Nasimi is able to condense and beautify complex thought," Hess explains.

Shamaxa - the birthplace of Nasimi

The city of Shamaxa or Shamakhi - also hosted several events including a presentation of a new sculptural work depicting the poet by Azerbaijani artist Rashad Alakbarov.

The ancient Shirvanshah’s Palace served as a backdrop for the contemporary Ensemble Horizonte from Germany.

"Our ensemble is often interested in combining traditional and modern music we often play old music Bach and Baroque music and medieval music in our concerts to demonstrate some lines of traditions through the centuries, says Jorg-Peter Mittman, the groups' co-founder and artistic director.

At the Azerbaijan Drama Theatre, a very special performance by the inclusive Candoco Dance company.

"What we’re trying to do is find a way of framing and celebrating difference, not to say that everyone is the same, but to say that we are all different and then to work out how we work together," says artistic co-director, Ben Wright.

The Tallinn Boys Choir from Estonia treated audiences to music from around the world: from Ave Maria to The Lion Sleeps Tonight, whilst the Azerbaijan Philharmonic hosted a music project called Sincere Dialogues by the renowned jazz musician Salman Gambarov.

"Knowing my love for various different duets the organizers said 'Why not perform three duets at the festival?'" explains Gambarov.

"We are always with others, and we need to meet people who can bring the creative process to us. ....This can be music, but also poetry, and painting," says musician Michel Godard.

"I always had a fascination with Azerbaijani culture, and Maestro Salman is an extremely sensitive and powerful musician," adds musician Wen Shu.

"In the music you can feel so much love and light. And everybody wants light and love!"

"Love is the most important thing in music and you always want to transport this feeling and comfort people with sound, and words, and poetry, and maybe there Nasimi’s poetry and the music meets today," says soprano, Margriet Buchberger.

The Nasimi Festival runs from the 28 September to 1 October 2019, in Baku.