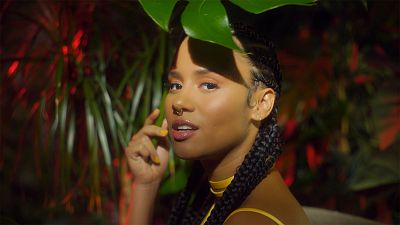 Cape Verde is currently at the spotlight of the world music scene and Mayra Andrade is one of the new great crioulo voices.

She is now on tour with a very personal record and says she's "super happy" with it.

"The idea was neither to make traditional Cape Verdean music nor afrobeat but to find something in the middle that could be my own sound. I think we did it. I'm super happy," says Andrade.

"It's called 'Manga' because mango is a sunny, tropical fruit. It's my favourite and it represents a very sensual femininity."

Born in Cuba, Cape Verdean by heart and family, Mayra Andrade has been a globe trotter since she was six years old.

Now in Lisbon, she lived for more than a decade in Paris after some time in Angola, Senegal and Germany. Mayra knows the feeling of being a migrant and sings about it.

"I have lived in Cape Verde at different times in my life. In childhood, adolescence and youth. Then I lived in several countries. I was privileged because my family followed a diplomatic career," she says.

"When I was 17 years old, I went to Paris alone and realized the feeling in so many of Cape Verde's traditional songs of departure, distance, nostalgia, separations and the hope of one day seeing the return."

Andrade moved to Paris following a dream. The first album came out in 2006 and three years later she shared the stage with Cape Verdean singer-songwriter, Cesária Évora.

They are frequently compared to each other.

"There was this big tendency to compare or say that I was the heiress to Cesaria Evora when she was still alive and singing."

"Although I always took that as a compliment, it bothered me because she was still a woman who was defending her music and her name around the world."

"What I hope to be able to do, if not as much as she did, is the best I can for Cape Verdean culture, African culture and world culture in music. Not only do I want to, but I will take my country's name to other universes."

By the end of last year the traditional Cape Verdean song, Morna, was inscribed by UNESCO on its list of Intangible Cultural Heritage.

And now Madonna is singing in crioulo in her new MadameX tour.

Invited by a common friend, Mayra watched one of Madonna's Lisbon shows and says she felt proud:

"Madonna has always been a big fan of Cesária Évora and Dino d'Santiago gave Madonna a great opportunity to dive into Cape Verdean music through the Cape Verdean community of Lisbon."

"That presence of the 'batukadeiras' - Cape Verdean female drummers - in Madonna's show, to me, is the most beautiful part of it."

Mayra Andrade will be playing live in France, Germany, Poland, the UK, Portugal, Belgium and Luxembourg in the following months.