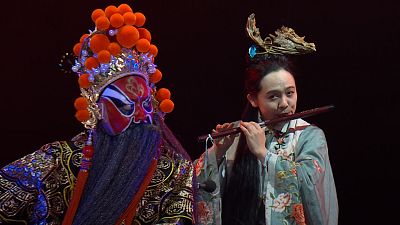 Tuesday 1 February marked the Lunar new year 2022 and more than a billion people around the world celebrated the occasion with family gatherings, fireworks, dances and parades.

Although the pandemic has restricted celebrations, many marked the occasion in public spaces.

There are more than 50 Chinatowns across the US. In Chicago alone, an estimated 20,000 people are set to join a street parade through the city’s Chinatown, taking place on February 13.

In Kuala Lumpur, Malaysia, visitors already gathered to watch the annual underwater lion dance performed by divers in the aquarium at Aquaria KLCC. In the UAE, hundreds attended Expo 2020 Dubai to enjoy a line-up of dazzling performances that included school children in red and gold costumes singing festive songs.

Dubai resident Miaomiao Cheng was part of the audience at Expo. “We have a big community of Chinese people here,” said Cheng. “We also have the International City Chinese cluster where there are a lot of Chinese people.”

Dubai’s International City is home to Dragon Mart, the world’s largest Chinese mall and trading hub for Chinese products outside the country. It's the emirate's answer to a more typical Chinatown, this vast dragon-shaped indoor mall is hosting Lunar New Year celebrations with drummers and entertainers performing traditional dragon, lion, fan and ribbon dances every hour from 6pm until 10pm between 1 and 7 February.

Before the merriment comes cooking and cleaning. Families bake festive puddings and homes are decluttered in a bid to remove any bad luck. Superstition plays a large part in the proceedings.

The Lunar New Year festivities are set to continue for 15 days, until the night of the Lantern Festival. Also known as the Yuan Xiao Festival, which honours deceased ancestors and is upheld as a time for reconciliation and forgiveness. Houses are adorned with colourful lanterns and families share the fruit-and-nut-filled rice balls, yuan xiao, that give the festival its name. Their round shape symbolises wholeness and unity.

The holiday, which is observed by primarily East Asian countries and Vietnam, in addition to their diasporas, ushers in the Year of the Tiger.

The Year of the Tiger is considered especially lucky for those born in it, which occurs in 12-year increments - the last one taking place in 2010.

Being a tiger is seemingly a stroke of good fortune in itself as tigers are said to possess confidence and charisma, courage and ambition and winning leadership skills.