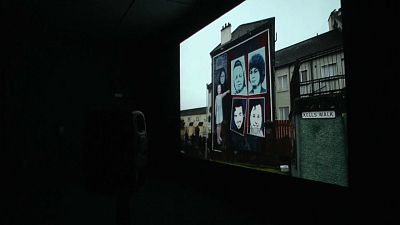 This piece examines the role of women in the civil rights movement in Derry/Londonderry   -   Copyright  AP
By Euronews  with AP  •  Updated: 27/09/2019

This year's Turner Prize-shortlisted pieces will be on display in Margate from tomorrow, with Brexit on the agenda.

Colombian artist Oscar Murillo's work "surge (social cataracts)" depicts people staring out to the North Sea, but with their view of the water and the European continent on the other side of it obscured by a dark canvas, with only a sliver of what lies beyond revealed through a slash in the canvas.

The work is one of four shortlisted entries to the prestigious and often contentious annual art prize, founded in 1984 and given to an artist residing in Britain or British-born but living elsewhere.

Curator Fiona Parry explains that Murillo's work focuses on the current political and socio-economic situation in the UK. The group of papier-mâché figures represent a globalised workforce, while the black cloth represents the "darkness of the contemporary moment in the UK and globally".

She added: "I think it's a broader idea of blocking the view, the outward-looking view, to anywhere really. And that gesture of blocking the light. But I guess there is still this sort of glimmer of hope, there is a slash in the canvas, and you can just see the sea on the horizon."

Helen Cammock's video piece A Long Note, meanwhile, examines the overlooked role of women in the civil rights movement in Derry/Londonderry, Northern Ireland that began in 1968. The work also connects to broader global class, race and gender struggles during the late 1960s.

All works will be exhibited at Margate's Turner Contemporary gallery, from 28 September to 12 January 2020, and the winner of the Turner Prize 2019 will be announced at a ceremony on 3 December.