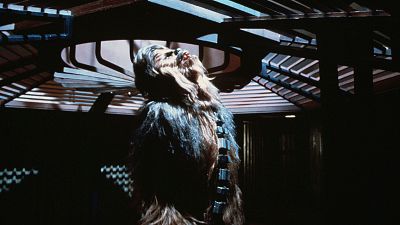 Peter Mayhew, who roared inarticulately but somehow understandably as Chewbacca for generations of "Star Wars" fans, has died at age 74, his family announced Thursday.

Mayhew died Tuesday at his home in north Texas, his family said. A cause of death was not reported.

Mayhew towered — literally — as Chewbacca, a 200-year-old Wookiee from the planet Kashyyyk who co-piloted Han Solo's Millennium Falcon, which once made the Kessel Run in less than 12 parsecs. Various references listed his height as 7 feet, 2 inches to 7 feet, 4 inches.

Mayhew, a native of London, played the role in the original "Star Wars" trilogy in 1977, 1980 and 1983 and reprised the character in "Revenge of the Sith," in 2005, and "The Force Awakens," in 2015. He was a consultant for the most recent instalment, "The Last Jedi," guiding his successor, Joonas Suotamo, a Finnish basketball player.

"He put his heart and soul into the role of Chewbacca and it showed in every frame of the films from his knock-kneed running, firing his bowcaster from the hip, his bright blue eyes, down to each subtle movement of his head and mouth," his family said in a statement.

"But, to him, the 'Star Wars' family meant so much more to him than a role in a film."

In a statement, Lucasfilm head Kathleen Kennedy remembered Mayhew for his "lovable" interpretation of the furry beast.

US, Europe plan for any cutoff of Russian natural gas