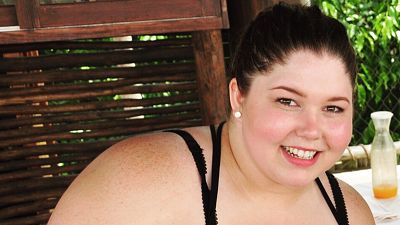 Mary Jane O'Toole spent most of her life shopping in the plus-size section at stores, feeling frustrated she couldn't find the styles she loved in her size. And if she did, she said she usually had to pay a higher price, which she called a "fat tax," simply because she was buying a blouse in a bigger size.

"It was very limited when I was growing up and I was acutely aware of the fact things that are bigger cost way more money," O'Toole told TODAY.

After her husband, Alex proposed in December 2016, O'Toole decided to start herweight-loss journey.

"I had a pretty good idea I didn't want to be big as a bride. Growing up I told myself, you're not going to be a fat bride," she said. "But I don't want to take away from anyone's experience being a plus-size bride. Every bride is beautiful."

The couple, who live in Orlando, Florida, downloaded the Lose It! app, where they meticulously tracked everything they ate for a year and recorded the pounds they were losing.

By the time she started shopping for a wedding dress, O'Toole said she was a "street size 12." The average American woman is a size 16 to 18, according to a study published in the International Journal of Fashion Design, Technology and Education.

However, the bridal stores she went to were pulling dresses in sizes 18 and 20 for her. She found a dress she liked but it wasn't available in her size.

She tried it on anyway. "They had to put extra fabric in the back, so I could get a better sense of what it would look like closed," O'Toole said. "I found the dress I loved and they said if we have to order it in my size, it would be $600 more."

While O'Toole was used to paying a "fat tax," she decided this time would be different. Despite having "that big bridal moment" and falling in love with a dress, she committed to losing weight and searching for another dress.

After one year of tracking her diet, O'Toole started working out four to five times a week and was "shocked" to discover that she loved the feeling of going to the gym.

By the time she walked down the aisle on November 19 last year, O'Toole had lost 135 pounds. She ultimately found her dream dress, a stunning, long-sleeved size-six gown that exposed her back.

While she's proud of her weight-loss journey, O'Toole said she wants to send a message to the fashion industry that paying attention to plus-size women is good for business.

"Big girls want to look good too and it doesn't help our self esteem to go into a store and not find our size," she said. "Women spend money. If most of the female population is plus sized, wouldn't you want to accommodate the people who want to buy your clothing?"

"Make those accommodations and make people happy in their clothes," she said. "And then business will be cyclical. They'll keep coming back to buy more."