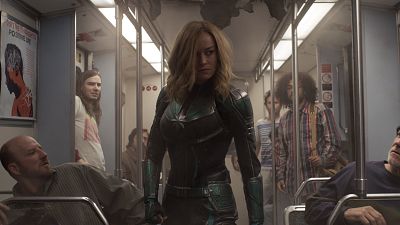 In the months leading to Friday's release of Disney's "Captain Marvel," an online trolling campaign inundated YouTube with derisive videos and a swell of users on Rotten Tomatoes, an influential movie review website, attempted to torpedo the movie's audience score.

Previous campaigns had caught studios, movie stars and influential review websites by surprise, but not this one.

"The studios in the last few years learned you need to be ready in case the online conversation goes south," said Marc Kazen, lead strategist at RelishMix, a company that advises studios on digital tactic and has consulted on projects from Walt Disney Studios, owner of Marvel Studios.

The campaign against "Captain Marvel," which features the lucrative franchise's first solo female lead, reached a fever pitch in the two weeks leading up to its release. YouTube videos with hundreds of thousands of views accused the film's star, actress Brie Larson, of "ruining" or otherwise diminishing the Marvel brand and dismissed the movie as "social justice warrior" propaganda.

"Captain Marvel," the 21st entry in the sprawling Marvel franchise, is not the first high-profile Hollywood project to be targeted by online trolls. "Black Panther," "Star Wars: The Last Jedi" and the female-led "Ghostbusters" reboot were hit by racist or sexist backlash.

Stars in the past have tended to shy away from commenting on such campaigns and issues — "don't feed the trolls" is a common refrain — but Larson has taken a different approach. An outspoken proponent for gender equality, she has used the controversy to boost "Captain Marvel" and pointed to parts of the movie as anticipating the blowback.

In one scene, Larson's character is told by a man to smile, a refrain commonly associated with gender discrimination and harassment.

"It happens. This is part of why art that depicts the female experience is so important," Larson said in an interview last month.

Sure enough, the first trailer of "Captain Marvel" was hit by online critiques that Laron's character didn't smile enough. In response to the "smile more" complaint, for example, Twitter user @heymermaid posted doctored movie posters in which the stoic expressions of a trio of male Marvel stars — Robert Downey Jr., Chris Evans and Benedict Cumberbatch — were replaced with comically wide grins.

Melissa Ryan, a political consultant who researches extremism, said review bombing is an outgrowth of "Gamergate," a digital harassment campaign against female gamers that began in 2014 and roiled the industry.

"Many of the same people who brought us Gamergate are now bringing us the 'Captain Marvel' trolling, and they're trying to make the argument that the movie is just political correctness run amok," said Ryan, who is also the editor of the tech newsletter "Ctrl Alt Right Delete."

While Larson has met trolls on their own turf, other parts of the movie industry and its partners are taking other steps to address how trolling attempts to impact public perception.

Rotten Tomatoes, a review aggregation website, fought back last month when it banned user comments before a film drops in theaters, a bid to crack down on "non-constructive input, sometimes bordering on trolling." The tactic is known as "review bombing."

Social media platforms have also begun to act in response to troll campaigns. Facebook shut down a group that was attempting to coordinate trolling campaigns against Disney movies in the run-up to the release of "Black Panther." Twitter suspended some accounts that were sharing fake claims of physical assaults at "Black Panther" showings.

For "Captain Marvel," YouTube appeared to change its search results for "Brie Larson," which moved some of the attacks on her lower in favor of mainstream media outlets. The company previously announced that it was working to boost "authoritative" news sources.

Walt Disney Studios did not respond to a request for comment.

The early professional reviews for "Captain Marvel" were generally positive, but not unreservedly enthusiastic. The film had earned an 83 percent "fresh" rating on Rotten Tomatoes and a more muted score of 66 on the rival aggregator Metacritic as of Wednesday.

The pre-release professional response "indicates it's one of those movies most critics like just a little bit," tweetedBen Fritz, an editor at The Wall Street Journal and author of the book "The Big Picture: The Fight for the Future of Movies."

The film is expected to gross more than $100 million in ticket sales over its opening weekend, according to comScore, a firm that tracks box office data.