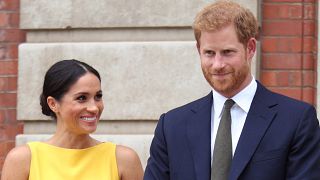 The Duke and Duchess of Sussex attend the Your Commonwealth Youth Challenge reception at Marlborough House in London, Britain July 5, 2018.   -   Copyright  Reuters
By Eun Kyung Kim  with TODAY Lifestyle  •  Updated: 16/10/2018

Whether girl or boy, the Duke and Duchess of Sussex undoubtedly will have a royally adorable child this spring.

But whether that baby officially get to be called a prince or princess is uncertain at this point because of a century-old rule related to royal hierarchy.

"Actually, they're not entitled to be 'princes' and 'princesses' unless the queen steps in and gives them that title officially," Camilla Tominey, associate editor of the Daily Telegraph, said Monday on TODAY.

That means it's possible that the new royal baby may be born with a title that doesn't reflect Prince Harry's, nor the family name and heritage.

"If it is a boy, it might be the Earl of Dumbarton, which sounds a bit weird because it's obviously not the same as Windsor or Wales for Prince Harry, but that's because he's far down the succession line now after the Cambridge children were born," Tominey said.

The Cambridge children, of course, are the three youngsters belonging to Harry's brother, Prince William, who is also known as the Duke of Cambridge. William is the second in line to the British throne, after his father, Prince Charles. After William, his children are the next in line of succession: Prince George, 5, Princess Charlotte, 3, and Prince Louis, who was born in April.

If Harry has a girl, she may just be called "a lady," Tominey said.

William and his wife, Catherine, the Duchess of Cambridge, faced a similar situation when they were expecting their first child.

That prompted Queen Elizabeth to override a decree issued in 1917 by her grandfather, King George V, that limited the titles that members of the royal family could hold. In essence, only the eldest male descendant in the direct male line of the sovereign could be called a prince.

But the Elizabeth revised the rule in December 2012 so that all of William's children would carry the title of prince or princess.

The monarch would have to make a similar change if the children of Harry and Meghan are to hold a title of anything other than an earl or lady.

"It's the complicated way us British do it," Tominey joked.

Kensington Palace issued a statement Monday announcing the joyful news that Harry, 34, and Meghan, 37, would be expecting their first child in the spring of 2019. The couple tied the knot ina May 19 ceremonythat was watched around the world.