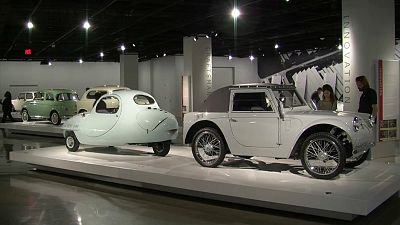 The history of Japan's car industry is being brought to life in two parallel exhibitions in Los Angeles. The first exhibition is called "The Roots of Monozukuri: Creative Spirit in Japanese Automaking". It highlights key elements of Japanese design philosophy in the years before Japan rose to market dominance in the 1970s. The second exhibit, "Fine Tuning: Japanese-American Customs", examines the rise of Japanese car culture and customization in both the domestic and American markets and how the two influenced each other to redefine car culture.

It all started in 1917 when the very first Japanese production car ever came off the line - at the time Japanese car producer took over a lot of car manufacturing know-how from the USA .

"Henry Ford may have invented the moving assembly line," explained Leslie Kendall, chief historian at the Peterson Automotive Museum. "But it was the Japanese that perfected the assembly techniques. They were the ones that did the "just in time" delivery system that kept inventories really really low so that they could be as efficient as they possibly could with their manufacturing and they also invest a lot in their people, in the health of their people, in the mental wellbeing of their people. It's a holistic approach to car building that has really resonated over time."

In the early years, Japanese cars were typically always thought of inexpensive and poorly constructed. But the quality improved constantly and in the 1970 Japanese cars conquer the markets around the world. and made Japan a leading player in the global car industry. Vehicles on display include Toyota, Suzuki, Nissan, Mitsubishi, Mazda, Honda, Datsun, Suminow, Hino and Fuji. The exhibitions "The Roots of Monozukuri: Creative Spirit in Japanese Automaking" and "Fine Tuning: Japanese-American Customs" can be seen until April at the Petersen Automotive Museum in Los Angeles, California.