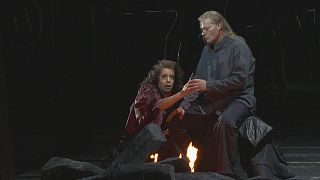 The Swedish soprano Nina Stemme and German bass René Pape are among the most sought after Wagnerian interpreters of our time. In this Bonus they share their experience with "Parsifal".

"I’m not sure if I heard it before I worked in Bayreuth but there I went to the dress rehearsal and I was totally overwhelmed especially by the first act," says Stemme. "The music it was a whole new world of sounds to me and especially in Bayreuth in that auditorium so actually we used it for our first daughter who was just born then to replay the first act, for her to fall asleep as a lullaby, a very long one."

Pape recalls immediately getting submerged in his role: "I remember the time when I studied the part of Gurnemanz. This was a very intensive time. You open the piano reduction (piano score) and flip through it and you know it never ends, at least for the first act the role of Gurnemanz is huge.

"I remember clearly the dress rehearsal in 2003 in New York. During the rehearsal period I always thought: Ok, if you make it to my last words at the end of the 3rd act, 'midday: the hour has come. My lord, permit your servant to guide you'... then I will do three signs of the cross when it's over; and I thought I would just be happy. But when we got to this point in the final dress rehearsal I was in such a positive state of mind, almost like in a trance that I wanted to go on and I asked myself: why is my part now over?"

Stemme says the role is highly demanding: "When I'm on stage, I'm in the role. It is exhausting, afterwards you are totally drained but you don’t feel it because the adrenalin is pumping, which it should be because I think, as an audience, you want to feel the kind of artistic sacrifice we make on stage. How much we give of ourself."