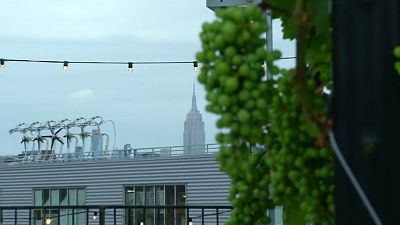 A rooftop in New York city might not sound like the best place for a vineyard but the founders of Rooftop Reds in Brooklyn are out to silence the sceptics.

Their building gives them space for 42 vine boxes. They had their first harvest last October, and according to founder Devin Shomaker, they have embraced the urban environment.

"We're the warmest vineyard site in New York State," explained Shomaker, "so we're able to actually develop these red varietals to a higher degree than any other vineyard established in the state. So we had higher brix readings, higher growing degree days, which is heat accumulation throughout your growing season. So all these you know urban attributes are actually contributing to a more developed, more concentrated Bordeaux red varietal wine."

For now, punters have to drink wine from outside New York. The first rooftop vintage will not be available until next year. Three hundred bottles are expected and will be on sale at around a thousand dollars each. Pretty expensive but still a nice place to go, a grape escape in the heart of the city.