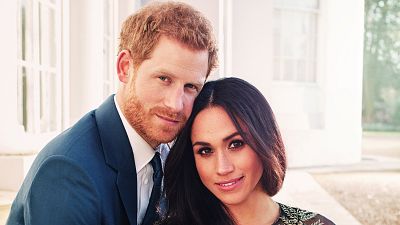 Start checking the mailbox: Invitations have gone out to Prince Harry and Meghan Markle's wedding!

The 600 invites were issued on behalf of Harry's father, Prince Charles, according to details provided Thursday by Kensington Palace. The ceremony on May 19 will be held at St. George's Chapel on the grounds of Windsor Castle.

All 600 guests also have been invited to a luncheon reception hosted by Queen Elizabeth, Harry's grandmother.

Later that evening, "around 200 guests" will attend a private reception hosted by Prince Charles, which will take place at Windsor's Frogmore House.

The palace did not disclose any of the names on either of the lists. Speculation has grown whether former President Barack Obama and his wife, Michelle, will make the cut since both have enjoyed a warm friendship with Prince Harryover the years.

However, the palace did reveal plenty of details about the invitations, which were die-stamped in gold and then burnished and gilded around the edges.

Kensington Palace has previously announced that the wedding ceremony will begin at noon local time (7 a.m. EDT/ 4 a.m. PDT). It also said Harry and Markle will open up the Windsor Castle grounds to some local school children, charity workers and select individuals chosen by local leaders throughout the United Kingdom. Once the couple has tied the knot, the pair plan to ride in a carriage procession through the streets of Windsor.

Earlier this week, the palace also revealed details about the wedding cake chosen by Harry and Markle — a lemon elderflower cake covered in buttercream and decorated with fresh flowers. The cake will come from the London-based Violet Bakery, which is run by pastry chef and California native, Claire Ptak.

Royal wedding: The people trying to cash in