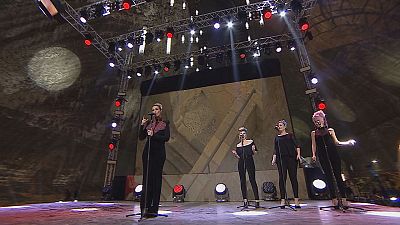 Romania’s semi-final heat for the Eurovision song contest 2018 went underground…quite literally. It was organised 86-metres underground in Turda salt mine, a popular tourist site in Cluj county. Organisers faced a series of technical challenges in 10-degree heat during their 7-day preparations in the run up to the event.

“It was a lot of hard work, a lot of security measures had to be put in place,” explained Mayor Cristian Octavian Matei.

It seems that Turda Salt Mine is really the star of the month! ? The first semifinal of Eurovision Romania 2018 took place last night exactly right there, being the first time when a stage of the national selection is organized 90 meters underground. ??#Romania

“After all we have more than 20 tons of cables and equipment down there – but I think it was worth it and these young people who I spoke with last night – the contenders – are delighted and proud to take part in such an event.”

Romania’s live Eurovision show was presented by opera singer, pianist and Romania’s 2013 Eurovision contender Cezar Ouatu. He was joined for his first salt mine experience by model and actress Diana Dumitrescu.

Cezar Ouatu told Euronews: “I think it will be a great experience for us, for the singers, for everybody because it’s also a great vibe to be here and I think also the acoustic and everything it must be great.”

Out of the 12 performers who were competing, TIRI managed to clinch one of the 3 top spots meaning he’ll compete in the final. The young musician who came away with a score of 43 points during the contest, found that performing in the salt mine has really left an impression.

He said: “I have heard it’s big but it’s more than huge and singing here was an honour I think, because not many people have had this opportunity to sing in a salt mine and I have heard it’s the most beautiful in Europe or probably in the world.”

Feli also got 43 points with her entry entitled Bună de iubit which means ‘hello to being loved’ so we can look out for her in the final in Bucharest too.

Feli trending on youtube Romania, climbed 4 spots in a few hours from #50 in the morning to #46 now ? ? ?? #selectianationala#Eurovision#TeamFelipic.twitter.com/zgKXmoYQla

Romania has in fact got five so called “semi-finals”, the last of which will be this coming weekend in the city of Sighișoara where twelve other entries will compete for three spots in the outright Romanian final.

Claudia Andas rendition of The One made her the third competitor chosen to head to the final.

https://t.co/9KI9FFB7Wu Here you can listen to our song The One! With the wonderful lyrics of Roxana Elekes , my music and the great performance of Claudia Andas and all the team! :-) We'll be at the Romanian National Final in February 25th! #selectianationala#Eurovision2018

The Romanian Eurovision song contest grand final will be held in the capital city of Bucharest on the 25th March. The winner will represent the country in the international competition hosted by Portugal in Lisbon, this May.

Claudia Andas is thought to be in with a fighting chance. She dominated this heat with an impressive 56 points.