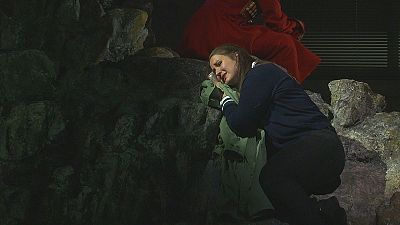 Bringing forgotten masterpieces back to life: that’s the mission of the Wexford Festival Opera in Ireland.

Medea is both a classical story from mythology and it's also a story about now and any parting couple.

Written just after the French revolution, it is based on Euripides’ tragedy of Medea, who murders her children to take revenge on her husband who leaves her for another woman.

Award-winning actress and stage director Fiona Shaw, who has herself played the role of Medea on stage, offered a very modern take on the opera.

“What fascinated me when I originally hit on the story was that it’s more about life than it is about death. It’s the worst story and it’s not really about a tragedy, it’s about a catastrophe. The family are destroyed, the future is destroyed but what I was very excited by is that it is a huge description of how valuable love is,” she told Euronews.

Norwegian soprano and Operalia laureate Lise Davidsen made her debut as Medea, a role made famous by Maria Callas.

According to the conductor Stephen Barlow, “It’s one of the most demanding soprano roles you can think of. He wrote a very wide tessitura. Some of it is very high, there is coloratura and then there a long legato lines and then of course you have these lyric numbers where you have to have a divine floated piano.”

When her husband leaves her to marry the king’s daughter Glauce, Medea seeks revenge and poisons her. “Ruth Iniesta” takes on the role of Glauce. “Glauce has listened to all the stories about Medea. Since the very beginning she can feel her tragic ending, she can feel the fear about Medea, that presence, that power,” said the up-and-coming Spanish soprano.

For Fiona Shaw, the opera is timeless: “Medea is both a classical story from mythology and it’s also, of course, a story about now and any parting couple,” she told Euronews. “So we started with the idea of keeping the mythology, so whenever Medea mentions anything to do with her past, where she was from – Colchis – she could go there. That’s a rock, a rough place, but a place of memory. It’s surrealism but actually it’s very rigorous the way we use it.”

Conductor Stephen Barlow has received critical praise for his interpretation of Cherubini’s score, which marks a return to the Italian composer’s original, much faster tempo.

“Some of Cherubini’s music in this opera is very violent. The sounds are very sharp sometimes, the orchestration is supposed to be shocking,” he said. “It’s an opera that really gets under your skin. You can’t walk away and forget it.”

The 67th edition of the Wexford Opera Festival will take place from 19 October to 4 November 2018.