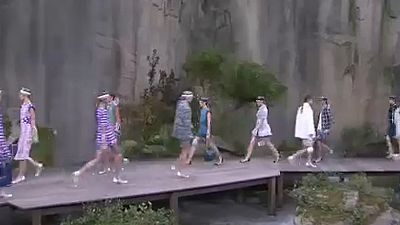 Chanel put a waterfall and cliff face inside the Grand Palais for their show at the Paris Fashion Week, and Cindy Crawford and Monica Belluci were among the celebrities who came to check out Karl Lagerfeld’s latest looks.

The ready-to-wear collection showed off Chanel classics with a twist,with Lagerfeld taking a bow at the end alongside his godson.

Volume and shamelessly garish fabrics were allowed to run riot by Stella McCartney at her latest ready-to-wear show, which sported a very 1980s vibe. The nimble McCartney tailoring that made her name was to the fore, with the British designer stressing her extensive use of sustainable viscose and cruelty-free alternatives to leather. The formula works, with profits up 42.5% in 2016 to nearly 8 million euros.

Westwood’s husband and creative director Andreas Kronthaler expressed his roots through colours and patterns. Despite 25 years of working together, their first joint collection together as ‘Andreas Kronthaler for Vivienne Westwood’ was only in March 2016 under the title ‘Sexercise’.